For the first time in the history of the Middle East, a huge awakening campaign is being organized against the spread of plastic surgery among Arab women.

Plastic surgery has widely spread in the Middle East, changing the latter’s culture and creating a clash identity. Most Arab women have similar facial and physical features nowadays.

Recent studies show that Lebanon registers the highest number of plastic surgeries, which seem to be on the rise. This was the trigger point that pushed the Middle East’s top 3 celebrity makeup artists Bassam Fattouh, Hala Ajam and Fady Kataya to step in and fuel the social awareness campaign, in an attempt to save what’s left of natural beauty in a country that’s so full of it! The 3 beauty experts will be taking on this initiative to sensitize people on the hazards and the downside of plastic surgery.

The initiative aims at clarifying the difference between corrective surgeries, done to beautify the look and boost self-confidence, and obsessive surgeries, which distort and hide the facial features and expressions. 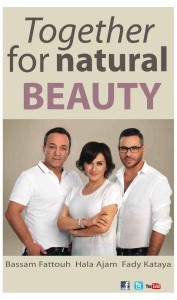 In this huge wake-up call, Bassam, Hala and Fady will promote and reflect a prettier, more natural beauty image of the Arab woman, through applying different makeup techniques individually on one model’s face in order to show that women don’t need to go under the knife to reach their real beauty.

One of the other objectives of this campaign is to change people’s perception of the Arab woman and to see her as a naturally beautiful person rather than a plastic surgery addict.

Moreover, the 3 famed makeup artists will also be the spokespersons of this huge campaign, which is the first of its kind in the Middle East.

The reason why this awareness campaign will be successful is because Bassam, Hala and Fady are considered “top notch” in the Middle East, having worked with regional and international celebrities (Haifa Wehbe, Nancy Ajram, Elissa, Claudia Schiffer, Ester Canadas, and Queen Rania of Jordan to name a few).

The “Together for Natural Beauty” campaign will be backed by an intense marketing strategy, both offline and online. The beauty experts will be making TV appearances and interviews to talk about the subject. They will also prepare a shoot all together and several media will be present to shed the light on the event.

One thing’s sure: the beauty trio will be focusing on the social media awareness campaign rather than their clients or their career. They will also clarify that they are with reconstructive and corrective surgeries but are absolutely against deforming facial features.