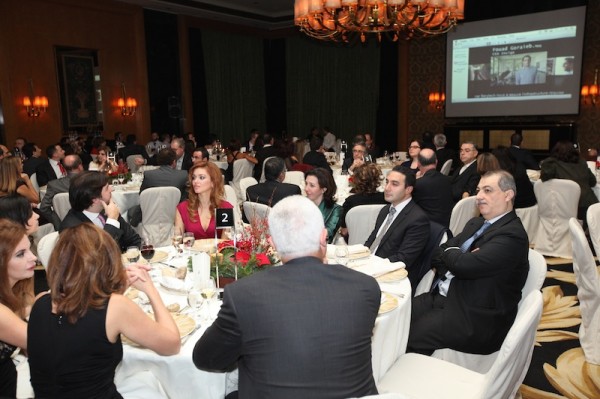 Berytech gathered all its resident entrepreneurs, shareholders, board members, friends and graduate entrepreneurs in a Gala Dinner that took place at the Four Seasons Hotel in Beirut to celebrate its 10th anniversary in the presence of H.E Mr. Nicolas Sehnaoui, Minister of telecommunications, H.E. Mrs. Angelina Eichhorst, Head of delegation of the European Commission, several members of Parliament, as well as the Rector and Vice-Rectors of Saint-Joseph University.

The evening kicked off with a welcome speech by Berytech’s Chairman, Mr. Maroun N. Chammas who overviewed ten years of achievements but also shared his outlook for 10 years to come. “Ten years, he said, it’s 140 enterprises hosted, 75 enterprises graduated, 550 jobs created, more than 1000 entrepreneurs trained, more than 350,000$ disbursed in grants and more than 4,000,000$ invested in tech startups”.

Mr. René Chamussy, Rector of Saint-Joseph University, expressed his pride in this initiative, which was initially led by the university, and the results it has achieved: “Dreaming about growing a country is building 1000 Berytech for the future… In the mean time, congratulations to all the men and women supporting this initiative. It is beautiful, very beautiful.”

Addressing the audience, Mrs. Eichhorst, the EU Ambassador declared: “Berytech is a pioneer. It supports the Lebanese creative spark and nurtures inspiring innovative ideas able to compete at international level…”

A documentary chronicling the achievements of Berytech has been aired, and recognition prizes were awarded to ten enterprises that  have marked Berytech by their dynamism and their success; namely: B Synchro, Dermandar, Ethos, FVC, Invigo, Paravision, The Gate, and Wonder 8, as well as two women entrepreneurs Mrs. Maha Lahoud from Play Lebanon and Mrs. Michèle Tyan from Djinn House.