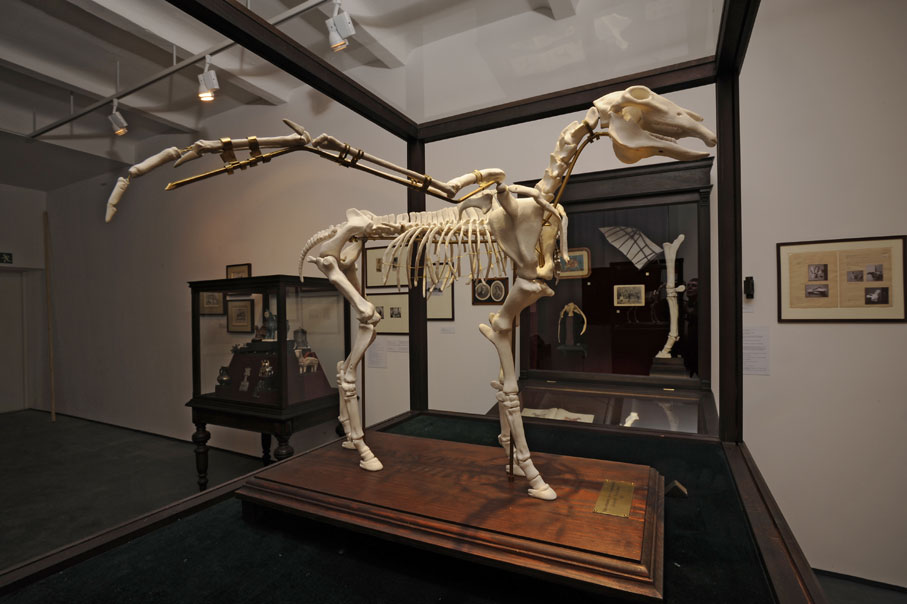 Going back in history, inspires us, teaches us and maybe helps us understand the world today.  A new installation by Mohamad-Said Baalbaki embodies an artistic implementation of the historic and cultural enquiry into mythological theories as they emerge from the dialogue between western and Islamic culture.

Employing the methods of natural history, Al-Burak promotes the credibility of a fictive story that takes its origin in the history of culture, thereby critically illuminating the mechanisms of both disciplines in the moment of their interaction. The work is concerned with the issues of the original, reproduction and forgery and the role played by the beholder in distinguishing those categories. Al-Burak questions the prerogative of historic interpretation institutionalized in the museum and its effect on our perception that changes according to context.

Mohamad-Said Baalbaki was born in 1974 in Beirut, South Lebanon. During his childhood in the midst of the Lebanese Civil War and Israeli occupation, he and his family were forced to move to Beirut. They stayed at the notorious Wadi Abu Jamil neighborhood, which was then a ghetto inhabited by war refugees from various ethnic and religious backgrounds.

In 1994, Baalbaki started his education in fine arts, painting at the Institut des Beaux-Arts in Beirut. By 2002, he had moved on to Berlin to continue his studies at the Berlin University of Fine Arts (BUFA), where he also pursued a Master of Arts at the Institute Kunst in Kontext. He was awarded the Meisterschülerpreis des Präsidenten prize from BUFA in 2005. This later lead to scholarships with Solidere’s Artist in Residence program (Beirut) and a stipend from the arts and sciences graduate school at BUFA.

Baalbaki reached international success early on in his career, exhibiting his work worldwide since 1998 in the Middle East (Egypt, Jordan, Lebanon, Syria and Teheran), Europe (Germany, France and Switzerland) as well as Canada and the United States. In addition, Baalbaki’s work has been part of some of the most prestigious exhibitions and galleries across the globe. With a unique sense of style and a post-modern vision, he is undoubtedly at the onset of a very promising career.

A possible source of inspiration, Baalbaki cites the below extract from the poem, The Waste Land by TS Eliot, in his exhibition catalog:

“A heap of broken images, where the sun beats
And the dead tree gives no shelter, the cricket no relief
And the dry stone no sound of water. Only
There is shadow under this red rock
(Come in under the shadow of this red rock)
And I will show you something different from either
Your shadow at morning striding behind you
Or your shadow at evening rising to meet you
I will show you fear in a handful of dust.”