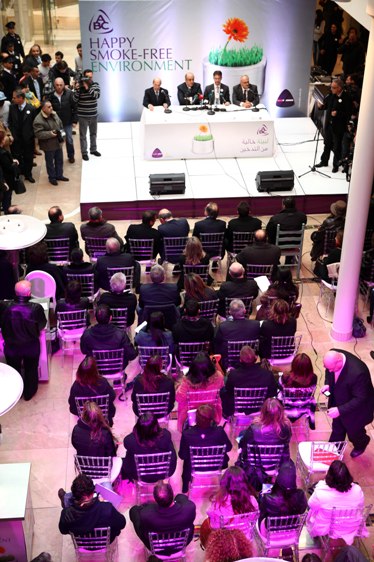 As of March 1, and as per the regulation, ABC implemented the tobacco control legislation number 174 to become a non-smoking mall, excluding restaurants and cafes. In addition to that, ABC has launched a ‘Happy Smoke Free Monday’, extending its non-smoking initiative to the restaurants and cafes every Monday, as a gentle transition to when the law is eventually fully implemented. The purpose of this is to raise awareness on the dangers of smoking and helping create a health-oriented culture amongst the Lebanese society.

“ABC has been part of the Lebanese community for 75 years and we believe in giving back to this community” said Robert Fadel, Chairman of ABC. “ABC is the ultimate family meeting destination, thus, helping our customers, especially the teenagers, quit smoking is our responsibility and we hope to set the good example for other corporations to follow our lead in order to contribute in making Lebanon a healthier country”, he explained.

TFI professional trainers held an anti-smoking instructive session for all ABC tenants and staff to inform them about the campaign’s benefits so that they are able to educate mall visitors and shoppers.

ABC is also implementing an educational program by setting up focal points in its store to educate its customers about the dangers of smoking, as well as developing a digital campaign on all of ABC’s social media channels to target the young generation.