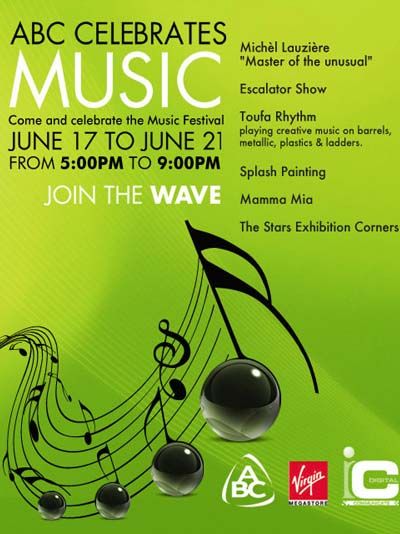 From the 17th till the 21st of June, the music festival at ABC Achrafieh and Dbayeh was raided by a variety of performances as original as they were unique, coming from the world over. ABC visitors discovered international artists such as Michel Lauziere, “master of the unusual” who stunned his audience with his colorful balls, his musicals horns, his singing umbrella, his singing spoons, plates and other surprising gadgets.

Other rhythms resounded through the levels of ABC as well: Toufa Rhythm beats created an exceptional visual and auditive ambiance, inviting visitors to participate in their escalator show. Splash Painting amazed visitors’ eyes leaving them blown away by paintings created by means of paint jets. On another note, the romantic spirit descended on ABC Dbayeh with a performance from the musical talents of Mama Mia.

Finally, during the entire duration of the music festival, visitors of ABC Achrafieh discovered an exposition dedicated to six musicians honoring musical giants from the passing 100 years of music and in particular huge stars such as Elvis Presley, Madonna, Micheal Jackson, The Beatles, Fairouz and Edith Piaf.