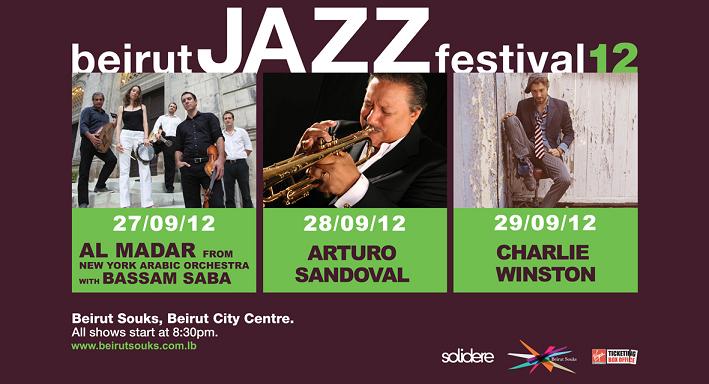 For the fifth consecutive year, Solidere organizes Beirut Jazz Festival in Beirut Souks on the 27th, 28th and 29th of September 2012. The international Jazz festival will feature this year also Jazz icons performing for the first time in Lebanon.

Al-Madar: is a new ensemble conceived by renowned figure of Arabic music and director of the New York Arabic Orchestra, Bassam Saba of Lebanon performing on the oud, saz, nay, and western flute and violin, in collaboration with Arabic percussionist and drummer April Centrone. Al-Madar is joined by virtuoso guitarist Gyan Riley Timba, Harris on violin/viola and trumpet, and versatile electric bassist Brian Holtz.

September 28 : Arturo Sandoval one of the most dynamic and vivacious live performers of our time, he has been seen by millions at the Oscars performing with Celine Dion, at the Grammy Awards with Justin Timberlake and as a leader, as well as on the Billboard Awards with Alicia Keys. Sandoval has been awarded 6 Grammy Awards, and nominated 12 times; he has also received 6 Billboard Awards and one Emmy Award, the latter for his composing work on the entire underscore of the HBO movie based on his life, “For Love or Country” starring Andy Garcia. His last album “Time for Love” had three Grammy nominations and won two for best album and best production.