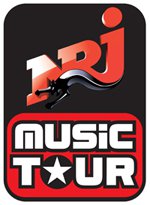 Each week is packed with events in Lebanon. So many to do, see and experience. I will try and give you my ‘favorites’ on a weekly basis…. But you can also check the calendar on BNL for more events and details.

I know that we are all anticipating next weekend’s NRJ Music Tour on November 6, at 9pm sharp, where renowned singers will be performing live at the Forum de Beyrouth, yey how, exciting… “I was born in a system….” Ok ok Ricky El featuring MC K are not here yet!

There’s plenty to do and see before then.

For those of us into international Film Festivals, I would suggest trying out the Latin American Film Festival, La Otra Imagen, an event representing movies from Argentina, Brazil, Chile, Colombia, Cuba, Mexico,Uruguay, Paraguay, Spain and Venezuela. Around 10 movies movies will play at the Empire Sophil in Achrafieh, scheduled to show this week, starting November 1 until November 7. For more details on the movies call 01-970253 or 01-420423

Discovering new cultures is always an added plus. The Korean Embassy in Lebanon is organising the annual Korean Cultural Week until November 2. South Korean movies will also be featured. If you’re in the North try Tripoli’s Chamber of Commerce Industry and Agriculture in Tripoli at 7pm on November 1 and if in Beirut check out the Bathish Hall of AUB in Beirut at 7pm on November 1. The show ends on November 2 with a Taekwondo performance at the Michel el Murr Stadium in Dora, a 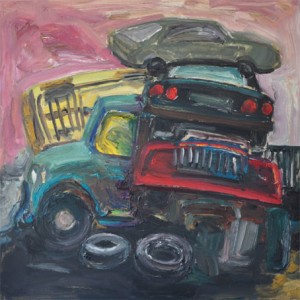 For the art lovers amongst us, there’s a lot happening. One that caught my attention, since there has been a lot of car accidents and road rage incidents reported, it would be interesting to check out Salah Saouli’s paintings related to major car bombing and violence. The exhibition is running until November 6 at Agial Art Gallery. Call 01 345213 for more details. 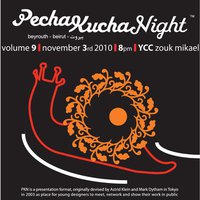 An event I am always intrigued by is Pecha Kucha. Pecha Kucha is back in Beirut, this edition includes presentations by Save Beirut Heritage’s Balsam Madi, graphic designer Karma Hamady, Roof 68’s own Kiki Bokassa and the Shankaboot alongside seven other designers and artists. This networking event creates a lot of opportunities for us to meet and discover new talents around town. It’s on November 3 at 8 pm at the Youth and Culture Center in Zouk Michael.

Now here’s a place I love, the Beirut Art Center. This week check out Exposure 2010 that will run until November 13. This event is part of its initiative to promote innovative local talent, a collective exhibition of works by emerging Lebanese artists as well as non-Lebanese artists residing in Lebanon. Call 01 397018 for more details.
For some laughs and entertainment, I would suggest Night of the Ad Eaters. On November 6 and 7, those who are looking for some inspiration or are in the advertising business an evening with over 300 ads from more than 50 countries made in the past 30 years will be shown at the Unesco Palace in Beirut. Call 01 999666 for tickets.
Zicco House in Sanayeh, the place zeals with art. Head down on November 6 for the launch of a new music album, Sandmoon by singer-songwriter Sandra Arslanian, whose music is intimate and her style resembles that of international artist Tori Amos. If you like that type of music then be there.
One of Lebanon’s talents, the Kordz, will be some music from their album, ‘Beauty and the East’ at The Basement club in Saifi on November 5. Their music alternative rock with an occidenta 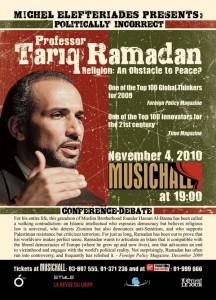 You know. We are always complaining we need some challenge in life. Michel Elefteriades, a self proclaimed emperor, is hosting a series of “Politically Incorrect” debates in Music Hall. On November 4 at 6 pm, Tariq Ramadan, a Professor of Contemporary Islamic Studies in the Faculty of Oriental Studies at Oxford University, who advocates the study and re-interpretation of Islamic texts, and emphasizes the heterogeneous nature of Western Muslims, will be giving the Lebanese audience an opportunity to listen to his thoughts.

What can we do on a Sunday, Jouzour Loubnan planting days which include planting Lebanese Cedars and Juniperus trees in Oyoun el Simane (Kfardebiane) on a 500.000m2 municipal land which they have fenced and protected, every Sunday until November 28. Open to the the plantation days are great for spending time with the family and friends while getting a little bit of exercise to start a whole new week. Call 01 429666 to book your participation a week ahead.