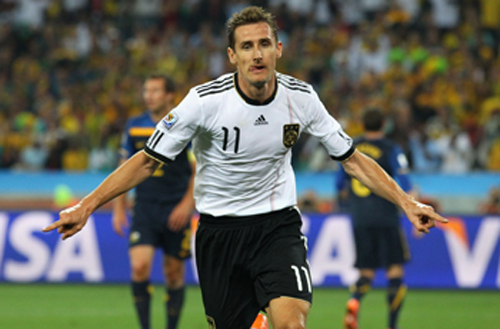 The German Machines crush the Aussie

The mighty Germans sent out a warning to all participating teams in the WC2010. The he die nationalmannschaft thrashed the Australian team with four goals by Podolski, Klose, Muller, and Cacau. The game was fully controlled by the German side, leaving the Aussie side in shock. With one of the best soccer displays yet in the WC 2010, the Germans lead their group D, with Ghana in the second place, and Serbia and Australia Following.

Asamoah lead Ghana for the first African win in WC 2010

Ghana presented the first African win in this international event through Asamoah’s goal in the 84th minutes in the Serbian goal. Beating  Serbia on Sunday Stadium Loftus Versfeld Stadium in Pretoria in the first round of Group D, gave a very important three points to the African stars before the next matches against Australia and the Germans.

Algerians Fail in the first test at WC 2010

“Desert Warriors” failed in fulfilling the hopes of millions of Arabs around the world against Slovenia. After controlling most of the match, the red card for the Algerian forward Ghezzal was the turning point of the game. The Slovenians took advantage and scored an extremely easy shot, after a lethal mistake from Fawzi Chaouci in the 79th min. This leaves the Algerians in the bottom of Group C, and the Slovenians leading the group with 3 points.