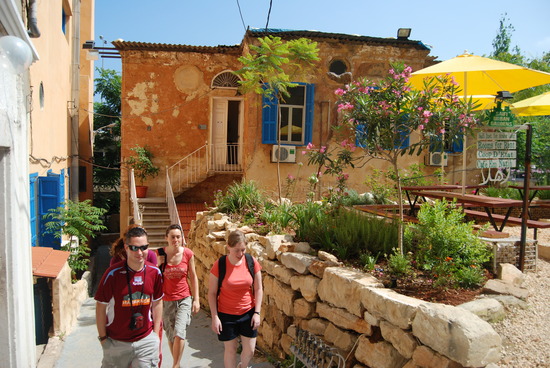 Lebanon welcomes foreigners yearly, many of which come to visit but end up living and working in the country after falling deeply in love with the city. While here, learning Arabic in the Lebanese Arabic dialect becomes a must. Tucked away in the beautiful Saifi area stands Saifi Urban Gardens (SUG), a small town on its own. Founded by married couple, Rana Dirani and Mac McClenahan, SUG is an affordable hotel and cultural venue for those who want to immerse themselves in the traditional Lebanese culture.

How did the idea come about?

The concept of SUG began taking shape when we began renovations on the Keyrouz Building (built: 1831) and the Doctor Semaan Building (built: 1943). Inspiration for SUG came from the location itself, on the former waterfront of Beirut’s East Side, and the students of the Saifi Institute for Arabic Language who always had such a difficult time establishing themselves in Beirut and finding an affordable place to stay.

Tell us about the concept behind Saifi Gardens?

Saifi Urban Gardens was created as a place where people from diverse backgrounds can feel comfortable making friends and socializing.  Gardens, open spaces and views encourage this kind of mixing but are hard to find in Beirut, so we created that at Saifi Urban Gardens. We then added several cultural venues that we felt were missing in Beirut.
Cafe Em Nazih offers affordable home cooked Lebanese food and drinks in a welcoming atmosphere where people can meet and interact.
Coop D’Etat Rooftop has great views, drinks and burgers in a totally unique atmosphere. The Cave is an affordable venue for events, artists, exhibitions and projects of all kinds in two ancient shops.

Activities generally revolve around the Lebanese culture or the interaction of Lebanese and foreign cultures; like Friday night Arabic music, which always leads to dancing at Cafe Em Nazih; Sunday night movies at Coop D’Etat; and for example, a Halloween party throughout the entire grounds of Saifi Urban Gardens.

Who comes to Saifi Urban Gardens?

Each aspect of Saifi Urban Gardens has a unique atmosphere and attracts different people. Coop D’Etat attracts more of the young, intellectual, student crowd; Cafe Em Nazih attracts mostly foreigners, Gemmayzeh locals and middle-aged professionals; the Cave attracts those interested in events and culture, often bringing in specialized crowds (for example, the Creative Space fashion exhibition); the hotel attracts travelers of all types; young and old, Lebanese and foreign.  All in all, it is a really diverse mix of people, which is our goal.