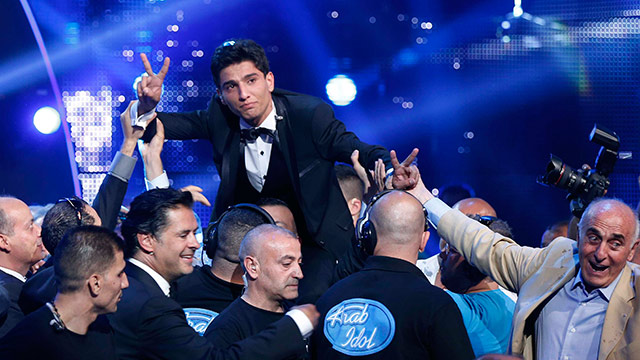 The fresh-faced 22-year-old from humble roots in a refugee camp endeared millions of voting television viewers with his Palestinian patriotic anthems and folk songs.

After watching Assaf’s victory from giant screens in the Gaza Strip and Israeli-occupied West Bank, tens of thousands of Palestinians set off fireworks, danced in the streets and blasted his music from cars idling in frantic traffic jams.

The scale of the celebrations easily outstripped most political or protest rallies of recent years and far exceeded those held after Palestinians gained non-member statehood in a vote at the UN general assembly in November 2012.

Many political leaders, who have increasingly alienated Palestinians with their bickering, have sought to try to hitch a ride from Assaf’s galloping popularity. Some greying officials changed their Facebook profile pictures to his smiling face and spiked hair, urged people to text him their votes and praised his nationalist credentials.

After the victory Assaf was named by the UN as its first youth ambassador to Palestinian refugee camps in the territories and neighbouring countries. He is expected to visit the West Bank to perform.