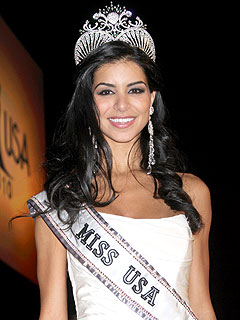 Fakih, 23, was born in Lebanon, moved to the U.S. as a baby, was raised in New York and moved with her family to Dearborn, Mich., in 2003, according to the Detroit Free Press. She told pageant officials that her family celebrates both Muslim and Christian faiths.

Asked how she felt after winning the crown during the primetime NBC telecast, Fakih replied: “Ask me after I’ve had a pizza.”

After almost falling in her evening gown earlier in the evening, Fakih was asked in the interview portion whether she thought birth control should be paid for by health insurance. She said it should. “I believe that birth control is just like every other medication, even though it’s a controlled substance,” she said.

Miss Oklahoma, Morgan Elizabeth Woolard, was the first runner-up at the pageant, held at the Planet Hollywood Resort and Casino in Las Vegas.

Fakih succeeds Miss USA 2009, Kristen Dalton. She gets a one-year lease in a New York apartment with living expenses, an undisclosed salary, along with health, professional and beauty services. She will also compete in the Miss Universe competition.