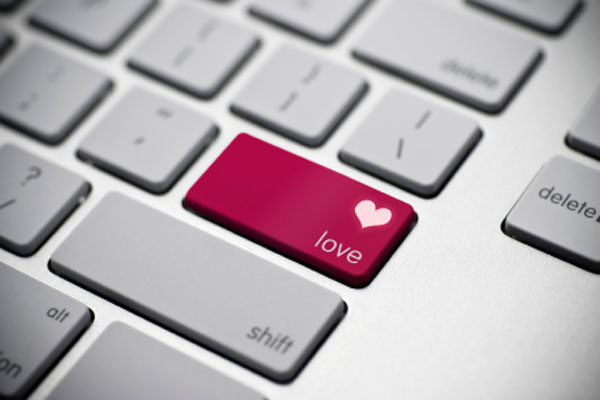 Love can definitely be blind but is it more blind online? And is that a good thing? Food for thought.

It must have been much simpler in the past. Caveman wants to mate with cavewoman, she either agrees or he bonks her over the head with stick, and drags her into cave? Of course later humankind progressed, societies developed and courtship protocols were established. Social norms began to dictate who could woo, date and marry whom. Fathers got involved. Astrologers got involved. Villages meddled.

Onto modern times. With the advent of technology, everything got more complicated, including love. What’s the protocol for dating now? We’ve still got real life interaction (although that’s arguably on the decline), but there’s also our ever-present phones and various chat apps, and of course Facebook, Twitter, Instagram, Skype, LinkdIn, Google +, Pinterest, Tumblr, YouTube, email, websites, dating sites, blogs, comments sections, and an ever-growing selection of other media to choose from.

Which mode of communication do you pick? Why choose one over another? And then, how does one start a conversation? What happens if you start to talk to someone on Facebook and want to switch media channels and move to a mobile device, or want to take things to the next (non-digital) level? The plot and the confusion thickens.

Around the world, and in Lebanon people are increasingly finding love online – blame distance and bad economies. There’s more and more people traveling for work (or to claim a foreign passport), but many still want to date or marry Lebanese. There’s the archetypal story of the expat Lebanese man “looking for wife”, who will often talk to a potential spouse online before meeting her, or between meetings.

But how do you know who you’re actually talking to, and possibly falling in love with? Is it safe, reliable, authentic? How “real” is social interaction without face-to-face interaction, or as a supplement?

And as if this technological smorgasbord of options is not complicated enough, we Lebanese live in a very diverse, albeit often very conservative society. Even if you’re not conservative yourself, chances are you’ve encountered people who are (or were raised by them). It’s almost inevitable that religion, politics, and social status will play some part in your dating life, even if it’s not your own choice.

There’s a lot that can get lost in translation online. Flirting, relationships, and feelings are difficult enough, but technology removes human contact, which is the very essence of romance (is it not?)

Relationships are harder in conservative societies because more parties and rules are involved in dating rituals. Now we’ve got additional dimensions to think about and it can be a bit of a mess. On the one hand, many of us feel the need to conform to the society’s standards. On the other hand we have to be “with it” and it’s only natural to change with the times, progress, and adapt to new modes of interaction.

What’s more is that our dating world is infinitely more complex than that of our parents, and we’re discovering these new protocols and etiquette with time, with practice, and with trial and error. We’ve got no one to ask for advice because we’re the pioneers of this dating world. We can try to guide ourselves or each other but there’s really no guarantee. But I supposed there never was a guarantee even when the dating “system” was a lot more clear and defined.

And then there’s the argument that perhaps technology has actually been great. Because of our conservativism it’s sometimes easier to meet and talk to potential mates over technology. Some parents aren’t fond of their children, especially their precious daughters, dating at all. To many girls’ advantage, a parent can’t always control who she talks to online as tightly as who she can see in reality. Being seen alone in public with a man might endanger a woman’s reputation or even life in families on the very conservative end of the spectrum. Interacting through social media provides a much-needed opportunity for some people, a breath of fresh air.

Many also say that technology has also been a big help for people who are very shy. Having a mask to hide behind makes it easier to talk, and to bond. It’s like they say, “give a man a mask and he will show you who he really is.” Putting on the mask of social media, and having that anonymity can bring out the worst in people, but it also brings out the truth in people, which can in turn be the start of a wonderful, honest relationship between two people that may not have been able to accelerate otherwise.

It may be cliché, but love really is blind. Those of use who’ve fallen in “love” (or like, or lust, or [insert other perplexing emotion here]) with someone who’s maybe not be good for us can vouch for it. Is online love even more blind? If it is, it’s like many other things in life—a double edged sword. While this blindness might aid us in being more ourselves, hidden behind the safety of the digital mask, it also puts us in more dangers of being deceived or not fully knowing the object of our affection. But it’s also made communicating easier, the search for people with like minds more fruitful, and bridged gaps that weren’t crossable previously.