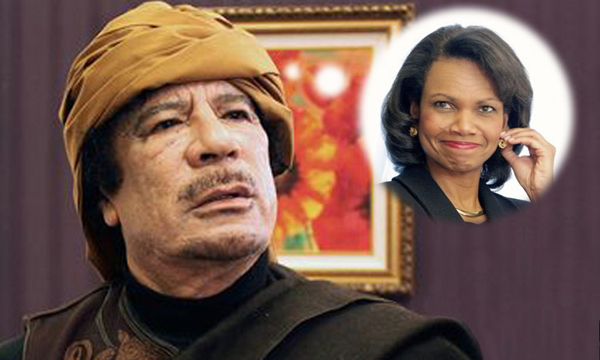 So much has been going on lately. For one, our Jeita Grotto supposedly made it to number 9 on the list of the potential “New 7 Wonders” pseudo-contest. And speaking of wonders, Gaddafi died. I don’t know about you, but that came as quite a shock to me because judging by his speeches, I assumed he would live long after the next ice age and start his very own army of cockroaches (aided by the powerful Chuck Norris). It turns out Gaddafi did not have the endurance of the cockroaches or Norris, and was found brutally murdered a few days ago. While the news of any death makes me sad, I couldn’t help but smile at the opportunity to combine the “New 7 Wonders” and Gaddafi’s death into writing this week’s entry: “The 7 Wonders of Gaddafi.”
Thanks to ABCNews.com, I was inspired to add my two cents to “The Seven Weirdest Things about Muammar Gaddafi” that would put any world wonder to shame.

1.      His Home Away From Home: Why stay at a five star luxury hotel when you can eat, sleep (and hopefully bathe) in a tent? It’s not any tent either, it’s a bulletproof tent that our beloved Muammar took everywhere with him. Why stay at the George V in Paris when you can camp out right in front of it? Still feeling too civilized? Bring on the camels! His camels could be seen strolling around outside the tent. Add to that a harem and voila, you can film a movie for the “One Thousand and One Nights”. 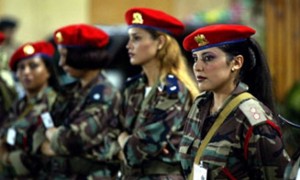 2.      His Aerophobia . . . and Other Phobias: The fearless man-beast actually did have a couple of phobias. He had a fear of elevators and aerophobia (by this I am referring to the fear of flying, not of his penis). As ridiculous as this may sound, lodging in a tent seemed as the more logical alternative to getting on an elevator at a comfortable and clean hotel. Why take that massive risk when you can simply fly your tent over on a separate airplane? Gaddafi also had Acrophobia (a fear of heights), never climbing higher than 35 steps. Why stop at the tent? I believe he should have traveled by camel too. Dying of dehydration in the desert is a lot safer than spending more than 8 hours on a plane that’s a lot higher than 35 steps off the ground.

3.     His Bootylicious Bodyguards: This entourage of women called the “Amazons” accompanied and protected Gaddafi everywhere he went – well, with the exception of that one time . . . you know, when he was killed. And what better way to guard this sexy beast than in high heels and make up? This pretty posse of protectors was always selected by the one and only Gaddafi. They all had to be virgins that had to take a vow of chastity when joining his clan.
Knowing this now, the image of the infamous “Zenga Zenga, Dar Dar” speech comes to mind and I have mixed emotions while imagining how these high-heeled virgins may try to act out all the incomprehensible threats made by Gaddafi during that speech-turned-music video. 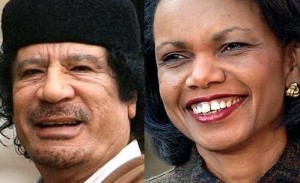 4.      His Galyna the Great: Galyna Kolotnytska was Gaddafi’s trusted voluptuous Ukrainian nurse who took care of him for the past ten years. While the Amazons remained celibate virgins, there were many rumors about Gaddafi and his curvacious nurse having a secret romantic affair. He had several other Ukrainian “nurses” who attended to him, calling him “Papa” or “Daddy.” Hugh Hefner much?

5.      His Crush on Condoleezza: Gaddafi truly was a ladies’ man – and what great taste he had too. Aside to the hot nurse, he was crushing on Condoleezza Rice, former US Secretary of State. In 2007, Gaddafi referred to Rice as his “darling black African woman”. When she visited Tripoli a year later, he gave her 200,000 USD worth of gifts (including a lute). Recently when rebels broke into his compound, they found a photo album filled with Condoleezza’s photos. It was Gaddafi’s homage of love/obsession to this black beauty. Let’s all be thankful that these two never had a love child (or forty) together . . . it would have been Planet of the Apes all over again. 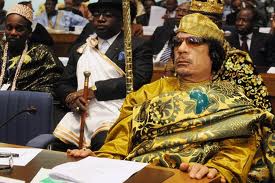 6.      His Impeccable Sense of Style: Ever noticed Gaddafi’s wardrobe? He used to put Lady Gaga to shame. I’m pretty sure they shared the same stylist; it’s too bad we never got to witness a Gaga vs. Gadda showdown. In any case, Gaddafi’s choice of fabric and print ought to inspire collections and runway shows for decades to come. He always knew how to make a statement and stand out from the crowd. Animal and African prints, daring and earthy colors, Gaddafi’s wardrobe was definitely unique and richly paired with eye-catching accessories including gold chains and fashionable hats. His outfits always came together perfectly, matching with his naturally curly hair and healthy green (occasionally yellow) complexion.

7.      His Bunga Bunga: We’re pretty much all familiar with “Zenga Zenga” by now, but “Bunga Bunga” is a whole different story. In 2010, while Italian prosecutors were investigating Italian Prime Minister Silvio Berlusconi, an underage prostitute called Karima el-Mahroug revealed that she had participated in an orgy called a “bunga bunga.” According to La Repubblica, she told prosecutors, “Silvio told me that he’d copied that formula from Muammar Gaddafi. It’s a ritual of [Gaddafi’s] African harem.”
Well, aren’t you kinky and cheeky Mr. Gaddafi!
I told you he’s a ladies’ man . . . even bello ragazzo Italiano Berlusconi takes love making tips from Gaddafi.

Well then, as you can now see there was definitely a human side to Gaddafi. He enjoyed traveling, women, love, sex and fashion . . . not necessarily 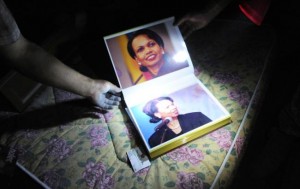 The 'Book' of Love

in the same way that normal people do, but in his own unique  way.

Since I always end my “La Wlooo” entries with a quote, here’s a compilation of Gaddafi’s most fascinating quotes:

“A woman has the right to run for election whether she’s male or female.”

“Were it not for electricity, we’d have to watch television in the dark.”

“I am not such a dictator that I would shut down Facebook. I’ll merely imprison anyone who logs on to it.”

“Protest however you want, but do not go onto the streets and squares.”

“T’is better to have loved and lost than never to have loved at all” Oops, this isn’t by Gaddafi – it’s actually by Alfred Lord Tennyson (but I’m sure Don Juan Gaddafi would have said it better.)