Have you been on FAKEBOOK? One on One with Patrick Honein from Leo Burnett

Sure you’ve been watching and hearing the campaigns against fake brands that have been swamping the market pretending to be the real deal. Thank goodness we have people protecting our welfare out there and thank goodness we have this protection here  in Lebanon – for a change you know you can depend on someone to protect you.

BNL talks to Patrick Honein: Creative Director/Digital Creative Director at Leo Burnett, who along side his active team, believe that through awareness campaigns, sometimes in an unconventional manner, you can reach people… 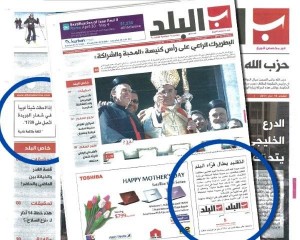 Tell us about the problem
The spread of counterfeit goods has become global in recent years and the range of goods subject to infringement has increased significantly. Here are some important facts and figures from Lebanon that you need to know: 60% of Lebanese consumers are now aware of the presence of counterfeit and fake products on the market (21% awareness increase since 2006). Counterfeit products exist in all product categories: cosmetics & beauty care, luxury products & fashion, food & beverage, sportswear & sports goods, household & supermarket products, electrical appliances, cigarettes, car spare parts, baby toys & products, pharmaceuticals… Almost 35% of Lebanese consumers revealed they were cheated by traders who sold them counterfeit products, based on a survey run by the Brand Protection Group-Lebanon in May 2009. 59% of these cheated consumers said they will never go back to the shops that sold them counterfeit products. 71% of the Lebanese consumers are willing to use a governmental hotline to complain about these shops.

What is BPG?
BPG is Brand protection group. It is an international organization that protects brands and consumers from fake products by creating awareness campaigns & seminars. So the objective of this campaign was to create as much awareness as possible about the fact that there are fake products in the market and to promote a number that consumers can dial to report those imitated products.


Tell us about the campaigns you have created to help create awareness?

We could dissect the campaign into two sections, conventional and unconventional media. As for the conventional part, we had billboards, a TVC and Radio spots promoting fake products in a fun vintage straight forward way with a sense of sarcasm and highlighting the dangers of the fake products.
Ref: http://www.youtube.com/watch?v=E3Qepu2uPqE

We also created Mall stands that had also packages of fake hair dryers, toothpastes and other common products. Of course hostesses promoting those products would at the end give you a leaflet and explain to you about the fake products in the market.

Let’s here about the unconventional campaigns

As for the unconventional part of the campaign, this is where it gets very engaging and interesting, we re-tackled the subject in many engaging and unexpected ways.

FAKEBOOK
We started by faking Facebook profiles of influential people. Like for example people who work in media, social media and users with over 2000 FB friends. Once we took their picture form their Facebook profile and we then used it in a new profile under the same name of the main user, but with minor changes. For exp: Patrick Honein will become Fatrick Honein.

Once the Fatrick fake profile was created, Fatrick then sent Patrick a friend request. Patrick will get shocked and irritated to see that someone is using his picture and almost his name. He would click on the fake profile and will read on the wall: Careful, the closest things to you might be fake! And then followed will be the info of the campaign.

Did Fakebook create any inconvenience?

Well, to make sure we don’t create much inconvenience, we made sure that this profile was only accessible to the person who we are faking, and that it will be deleted after 24 to 48 hours.

It must have created a huge impact, tell us…
This act echoed throughout the Lebanese online society and many bloggers, even if some were a bit conservative towards this approach, called it one the best social media campaigns ever done. Note that not one penny was spent to convince anyone to talk about this campaign. The reactions were genuine and by own will.
Ref: http://theidentitychef.com/

What other unconventional campaigns were launched?

IMITATION-MOB
We gathered around 40 people, and let them go through City Mall to imitate people to highlight the claim of the campaign; The closest things to you can be fake”. And of course, they had all this T-shirt on with the claim on it and the BPG number. The way people reacted was fun, it created a huge buzz in the mall and people started following the imitators to challenge them with moves and dances.
Ref: http://www.youtube.com/watch?v=VRhjuAoG3js

On Kalam el Nas, LBC, we started the program by replacing a fake Marcel Ghanem to kick off the show. For the people who are familiar with the program and with Marcel, were shocked when the program started, till after a few minutes the real Marcel revealed the stunt and gave us around 15minutes to discuss the campaign.
The same was done on MTV on the program “Men el Ekhir”.
Cut down version: http://www.youtube.com/watch?v=FfF5Jxopc68

RADIO STUNT
Besides the regular radio spots, we also replaced the most popular animators in town, targeting the frenchies with Nostalgie, the English speaking with Gevin Ford, and the Arabic with Sawt el Ghad. We replaced the show host with fake ones. And 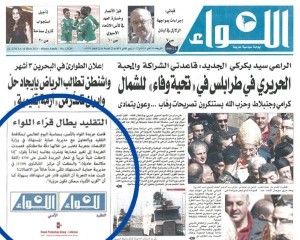 after claiming they were the real presenters and moving on with their program, they also revealed at some point the stunt, its purpose and explained all about the BPG and the campaign.

NEWPAPER STUNT
Al liwa2 + el Balad both on the counterfeit day were published with false logos.
The second day they explained the stunt.
This was also a Newspaper media premiere.
In the long full version on kalam el Nas, Marcel Ghanem spoke about it and showed the newpapers:
http://www.youtube.com/watch?v=Q5oTh1Wkc40

So just be careful – the closest thing to you might be fake! Please call to report 1739 Hotline!