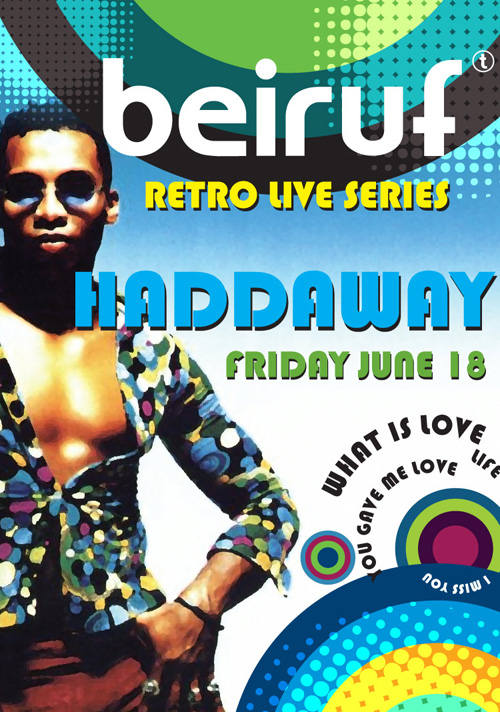 The Retro Live Series continues with Haddaway at Beiruf, Beirut.

With his new single ‘You Gave Me Love’, Haddaway has reconnected to the sound of his old hits – which isn’t so surprising, since after 15 years, he’s working together with hit producer Tony Hendrik once again.

The result is high class, first rate pop music, which convinces thanks to Haddaway’s unmistakeable voice and disco-friendly beats and is sure to pack the dance floors. There have been shades of the much-exalted new disco trend in Haddaway’s past: and now it is fair to say that the master is back!

With sales of 28 million records, two-time Echo prize winner Haddaway is a global player in the pop world and one of the few original artists at the top of the Euro-Dance-Pop scene. Born as Nestor Alexander Haddaway in Trinidad and Tobago, he studied at the renowned George Washington University in Washington D.C., graduating with a doctorate in political sciences and history.

In 1989, Haddaway moved to Cologne, which is why in addition to speaking fluent Dutch, English, French and German, he also speaks perfect Kölsch – the local Cologne dialect. After doing any number of different jobs and playing for the Cologne Crocodiles, he met hit producer Tony Hendrik. In 1993, with the dance hit ‘What Is Love’, the dream team scored a long-running disco super hit, which is still causing furore in its latest remixes, and which currently supports the Pepsi advertising campaign in the USA. Further hit singles such as ‘Life’, ‘I Miss You’, ‘Rock My Heart’ and ‘Fly Away’ followed, yet ‘What Is Love’ continues to outshine everything else, as shown by its 27 million hits on YouTube. Haddaway now lives in Kitzbühel, Austria, and performs up to 120 concerts per year.