DJs of Lebanon: Musical Aristocracy Gets the Stamina Twist 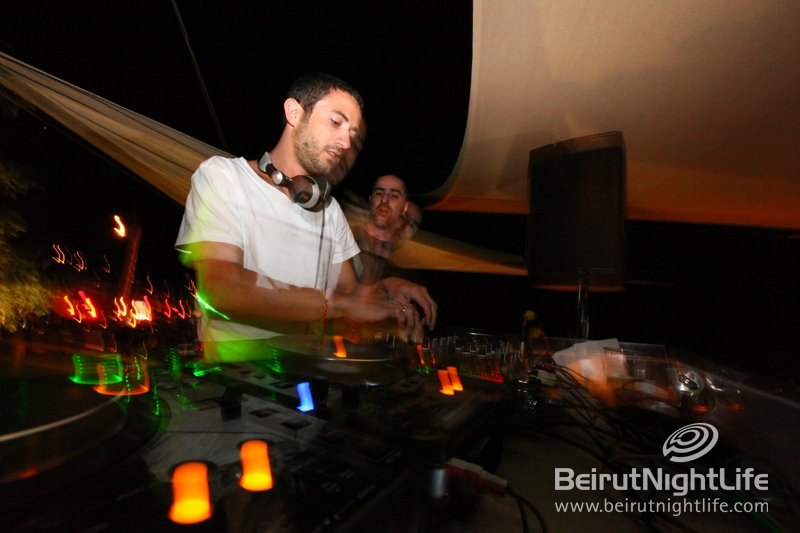 Stamina (of the famous duo Gunther and Stamina) has for many years been a resident DJ at iconic underground club B018, on Lebanon’s MIX FM and at countless events in the region. He comes from a musical family and he definitely inherited the creative gene, but it’s consistency, dedication, and inspiration from an eclectic mix of artists and genres that has influenced his sophisticated and twisted beats and got him where he is today. Get to know him:

In 2000, when I was 20 years old I went to study in Glasgow, Scotland. At that time I enjoyed listening to different kinds of electronic music. My next door neighbor James had a pair of turn tables so I started going to his place almost every day just to play records. I starting buying records and playing them at his place until I was able to afford buying my own tables. Later I managed to get a gig at ALASKA, which was one of the best clubs in the city. It’s where two of my favorite artists of all time known as Silicon Soul were the resident DJs at the time. It was an unforgettable night.

How did you become part of the duo Gunther and Stamina?

In summer 2005, Gunther saw one of my best friends Joe in Paris (they were friends as well) and Joe sent him straight to me. I was back in Beirut after 5 years abroad (between Glasgow, Montreal and Paris) and wanted to do something in my own country. Gunther was also back in Beirut after being abroad for many years. We had many things in common, the love of music, musical taste, principles, and we wanted to do something in Beirut, so it clicked and here we are.

First of all I grew up in family of well-known musicians and artists in the country. My father is a singer, dancer, and choreographer. My mother is a dancer and choreographer as well. My uncle has created many musicals and written and composed many famous Lebanese songs. There are a lot of Rock and Alternative influences in my music, like Pink Floyd, Led Zeppelin, The Doors, Alice In Chains, Pearl Jam, Sonic Youth, Massive Attack, Portishead and Nirvana of course. I also listened to a lot of French Rap, and Drum & Bass, Trip Hop, and Psychedelic trance too. Sasha, Digweed, Danny Howells, Underworld, Orbital, Plastikman, and Carl Cox have also played a big role in influencing my music. And of course Henri Hurtig aka Cid Inc and Big Al, who has always been the main supporter of Gunther & Stamina all these years. It’s a little bit of everything, I think everything around me inspires me.

I like intelligent and sophisticated music. My music is groovy, dirty and twisted.. and sometimes progressive. So basically it can vary from electronica, house, deep house, Tech House and Techno.

B018 Vol1, mixed and compiled by Gunther and myself, was released in 2011. I also released a track I did in collaboration with Beat Factory on the latest Nick Warren Balance 19 and I’ve had many other releases as Gunther & Stamina. Another double CD compilation mixed and compiled by Gunther and myself will be released in April on Ready Mix Records. It will include two Audio Lab (My collaborative project with Big Al and Gunther ) tracks: “It’s in Your Soul” and “Heartbeat”. We will also be releasing an EP on Replug that will include two Gunther & Stamina originals and two others remixed, one by Cid Inc and the other by Kassey Voorn. I’d rather release tracks for the moment until I feel I can release my own album because I want it to be perfect.

To be honest I don’t know. I have many projects at the moment but I’m mainly focusing on Gunther & Stamina, and our new band Audio Lab. I’ve always wanted to live in Spain, so I will probably be in Barcelona if everything goes the way I want.

There is not really a favorite one, each one is a different experience, but I can remember one night James Zabiela missed his flight to a show and he was the main act so we had to play the whole night in front of 3000 people. One of my birthdays also, I had almost all my friends and the people I know in Beirut at B018. That night was 3 years ago and the vibe was crazy.

Also consistency, without forgetting the crowd of course. I wouldn’t be who I am today if it wasn’t for the support they gave me.

I love football. I wanted to be a professional football player but my father wouldn’t allow it. I need to play this game and I do basically with friends at least twice a week. I also love cinema and art in general as well.

It could be the most beautiful country in the world, but let’s be real, when? I haven’t got the answer.