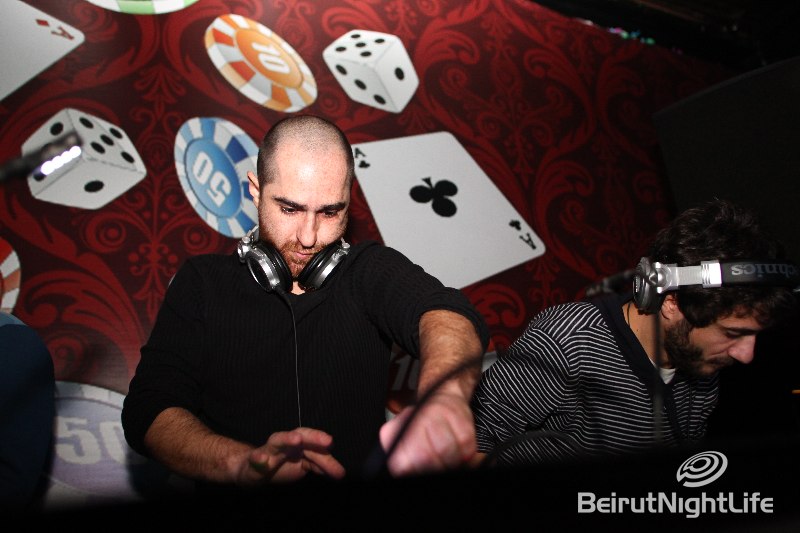 A true musician whose DJing skills come from a long line of musical education as well as extended experience at B018 and MIX FM, not to mention tons of events, DJ Gunther (one half of celebrated duo Gunther and Stamina) believes music should be intelligent and come from the heart. His deep love for Lebanon brought him back to his country, and he shares his story with Beirutnightlife.com below:

How did your DJing career start?

My family members are all amateur musicians, my parents and sister and brother all play different instruments. I’m a pianist and I studied piano from the ages of 7 to 16. We love music and we have musical collections at home dating back to the 1920’s. My brother began DJing in the 80’s so he taught me, but I never thought it would be a career. The older I got, the more people would come and talk to me about music. I used to listen to heavy metal since I was 12 and I was in love with this music till I heard John Digweed and Sasha’s Northern Exposure in 1997. I felt that music had the same energy and mood as rock. It’s mature music, not cheesy beats. Since then I wanted to be a DJ, but I persued my education anyway. I did hotel management, hospitality and business administration at WSU in the States, and I was DJing at the same time. I used to DJ for friends and at home, even later when I moved to Switzerland to work. In 2004 when I finished all my studies, I entered a program to become an electronic music producer at SAE Paris. Then I was sure that I wanted to switch careers so in 2005 I came back to Lebanon.

My music can be described as Deep House, Tech House and Techno.

What are your inspirations?

Old rock music like Pink Floyd, Black Sabbath, and my favorite band Iron Maiden. I listen to Arabic music if there is good music and poetic lyrics, like Fayrouz, but I don’t like the commercial music. In any type of music, whether English or Arabic, I don’t like easy music. I like intelligent music with feeling, with lyrics. The music I like has to have an intelligent message. My local influences are people like Naji Gebran, Adel Ghandour aka Big Al, and Zeid Hamdan, who make me believe we can have underground music in Lebanon.

I’m a pianist and composer and I believe you need education and experience in life to make music. As a DJ you’re here to tell a story to people, it comes from inside. I play what I feel and I’m in love with every song I play.

I have a show on Mix FM from 9-10 every Saturday exclusively. I also play every Friday from 4 to 7 AM at B018 and all night on Saturday. Plus I play at various big events.

How did you become part of the duo Gunther and Stamina?

An old friend of mine since I was young, Joe or DJ Nandy, introduced me to Stamina when I moved to Beirut. He had just come back to Beirut from London in 2003. We had a lot of chemistry and clicked from the beginning. All of his family is also in the arts so when we first met we sat down talked about music, and since then we’re always together. He’s like my brother.

“B018 Volume 1” was released in 2011 and we’re releasing a new album that is 2 CDs on April 28. I’m also working on a third album but it’s very different. It’s more musicology, a mixture that is much more chill out with a bit of jazz. It will be released next year. Plus, we have released many EPs with major record labels around the world. We’re actually releasing a new track next month.

I used to live in Switzerland and France, and my parents didn’t want me to move to Lebanon. But I like the weather, the food, and I believe in the values here that don’t exist in Europe anymore. People go to Europe as tourists and have fun and idealize it, but I know the system, having lived there. They have individualist societies, and I prefer to live in a collective society like Lebanon. It’s very easy here, it’s my country and I love it. I want to be a success in my country. I’ve already played in many clubs in the Middle East, and done huge events like the Formula One in Bahrain opening, the Creamfield in Abu Dhabi, Distant Heat Jordan, as well as other shows in the UAE, Qatar, Syria, Jordan and Bahrain. Hopefully in 5 years I will play more internationally, especially in Europe. With the Internet you can be a success anywhere. But I want to remain here, raise a family here in this culture that I love and will cherish all my life.

What’s the most difficult part of being a DJ?

With my music specifically, it’s difficult to get people interested in it. My music is a bit difficult, it’s not an easy type of music to understand right away. The problem is first getting people listen to it and making them switch, but once they’ve heard it they love it. They can’t listen to cheesy music after.

Some people may tell you fame but I’m actually a shy person. I’m very humble and I don’t like the fame… fame bothers me. It has advantages and disadvantages. The best part is I get to live with music, from morning till night. I look for, listen and make music, instead of being in an office and working for other people.

My main project is Gunther and Stamina. Another new project is Audio Lab, which is a band I created a year ago along with Stamina and Adel Ghandour. I do entertainment consultancy for bars like Capitol and Bar National. Also I produce music for TV ads.

I love to cook. I’m a big collector of documentaries, all kinds even forbidden pieces. I love animals. I have 2 cats and I’m thinking about getting a dog.

It’s the most beautiful country in the world.