DJs of Lebanon: A Lethal Dose of Musical Skillz 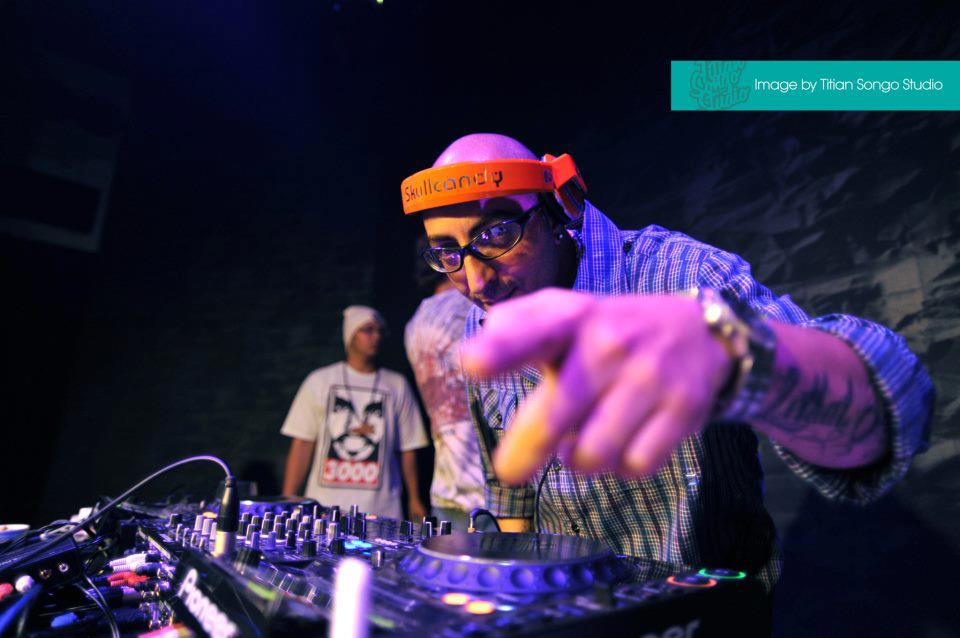 With two albums under his belt, a third in the making, and a deep-rooted passion for music, DJ Lethal Skillz continues to propel the Arabic Hip Hop scene while developing as an artist and seeking new inspiration. Though he’s in South East Asia at the moment, we caught up with him to see what’s up.

My musical journey goes back to when I was a little kid sitting in shelters with my mom and dad in Beirut during the first Israel invasion to Lebanon around 1982. My parents used to play music for us and sometimes play live instruments like oud to distract us from the sound of war upstairs. It kind of impacted me throughout my whole life — music became my escape. I started b-boying (breakdancing) at the age of 8, messing around and dancing with some kids on the streets. That was the time around the boom of movies such as “Breakin’” and “Turbo and his Broom Dance”. One day, I saw Herbie Hancock’s “Rock it” TV and saw Grandmaster DST start moving the record on the turntable back and forth and thought that the sound was FRESH! So that was the spark for me wanting to become a DJ.

From the age of 11, I started as a school DJ using tapes. I began playing at house parties, and eventually on the radio. I was one of the youngest radio DJs in the city at the age of 13. Though I was not allowed to work in a club due to my age, I used to slip into clubs through back doors at the age of 15 to DJ. I learned the art-form of using the turntables to manipulate the music, and found that it was also a way to express myself.

My experience with production stems from my turntabalism days as well. It taught me how to reproduce sounds live using the records by juggling and scratching and such. In 1995, I got back to Lebanon after a trip to Africa and hooked up with some local talents and we started imitating Western Hip Hop music until we started representing our own sounds, issues and culture in our music. We were growing up in parallel and learning more and more about the power of Hip Hop and what it can do, beyond the kick and snare and heavy bass lines.

Life in general and my curiosity to always exploit new sounds and old musical gems that has been slept on.

At the moment I’m living in the South East Asia working on some new musical projects and seeking new kinds of inspiration. That said, I do visit Lebanon every 3-4 months and I always make sure to play while I’m in Beirut as I owe it to my Country. I don’t play in big clubs anymore or commercial venues as I can’t really play what I want to play. I did that for long and it kind of drained me. I leave the “top 40” to the vast pool of other amazing DJs we have in the country and I personally stick to the essence and roots of music because I believe a good DJ should make people dance without having to play the commercial charts and the top 40s and such. Plus I like to play with my music, literally by scratching it, dicing it, remixing it make it sound different – if you let the record play as is, it’s boring.

I have two albums so far. The first one was titled “New World Disorder”, released back in 2008. That featured a vast pool of artists that I believed in. I wanted to push their voice and message out. My recent second album titled “KarmaGeddon” was released last year in February 2012 and also features Arab artists from around the globe and a few others. At the moment I’m in the works on my 3rd album that will be released towards end of 2013 / early 2014. I can’t tell you much but all I can say is it’s going to have artists from around the world that I been blessed to meet through my travels and musical journey so far.

I’m still on my quest, learning every day and elevating my knowledge and musical artform.

Thank God I’ve been blessed to meet and open up for most of my musical heroes, varying from De La Soul, Pharcyde, Pharao Monch, Dead Prez to DJ Cut Killer, DJ Q-bert, DJ Tony Touch and the list goes on… Each is special in it’s own.

Being in Lebanon during the war, access to music and DJ knowledge was so hard unlike nowadays as we have Internet and access to knowledge is much easier. Being a DJ has never been easier as today, but the key is to be original and to stand out from the rest, master your technical abilities and understanding of music while expanding your musical arsenal. In an nutshell you need to live it and practice everyday

Nothing can beat the adrenaline rush of rockin a concert of 10,000 heads and you’re in control. You can make them go crazy, make love or go home and sleep. On the other hand rocking a party with 50 people and being able to play the music that I love.

Jumping into old people’s house and negotiate to buy their old record archives, and I like snowboarding and scuba diving.

I been bumping the recent Gummy Soul – Bizarre Tribe – A Quest to The Pharcyde. Highly recommended for true soul and hiphop heads.