BeirutNightLife.com Brings You the Official Lebanese Top 20 the Week of September 21, 2014 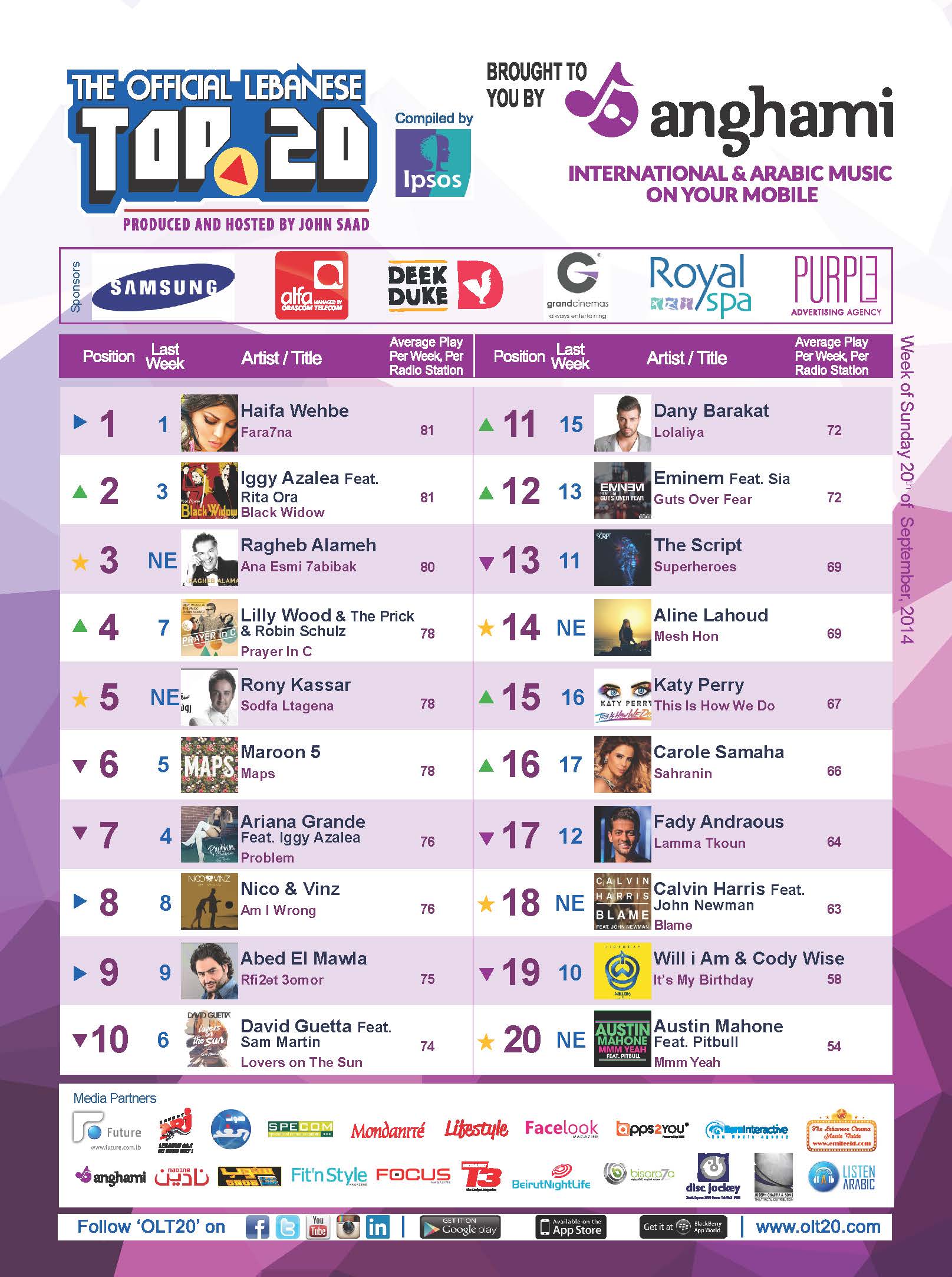 What a great achievement this week for Lebanese model / singer Haifa Wehbe as she scores another week at Number 1 on The Official Lebanese Top 20 with her latest single “Far7ana”! Will she be able to hold on to that Number 1 position for a 3rd week? Competition is becoming stronger as both Iggy Azalea & Ragheb Amameh are trailing behind with very close Airplay & Streaming figures..
This week also marks the 3rd month in which we’ve introduced the new OLT20 compilation formula which now takes into account the Anghami Lebanon streaming figures. The OLT20 Chart figures are now based on Lebanese Radio Airplay as usual, but also on the Anghami Streaming Figures, all compiled by Ipsos Lebanon’’.. This of course enables The Official Lebanese Top 20 to become even more representative of the Lebanese music scene.. Soon, and within the next few months, we will also include the real actual Downloads from the iTunes Lebanese store into the OLT20 Chart figures as well ..
From the New Entries of the week, we have “Mmm Yeah” at Number 20 from American pop singer Austin Mahone featuring vocals from Cuban-American rapper Pitbull, “Blame” at Number 18 from British DJ and producer Calvin Harris featuring British singer John Newman, “Mesh Hon” at Number 14 from Lebanese singer Aline Lahoud, and “Ana Esmi 7abibak” at Number 3 from Lebanese singer Ragheb Alameh.
On OLT20 this week we have 8 Local or Regional artists, and 12 Occidental ones!
Note that you can check out the latest videos from your favorite singers on the TV show “Hits N Bits / OLT20” on Future TV every Friday evening around 11:00pm, and Sunday evening at around 7pm for the re-run. Check the new & complete OLT20 chart by clicking on www.olt20.com now, or via the OLT20 App available for Download on all Platforms.
Finally, note that OLT20 can be heard every Sunday from 7pm on Sawt El Ghad 96.7FM, and every Monday from 7pm on NRJ Lebanon 99.1FM ! – It is also played 5 times on daily basis as a compact Top 20 Countdown on Future TV, and published weekly via all our 21 Media Partners (Dailies, Weeklies, Monthlies, Online, Outdoor, OLT20 Mobile App, and on Location)…