BeirutNightLife.com Brings You the Official Lebanese Top 20 the Week of March 24th 2013! 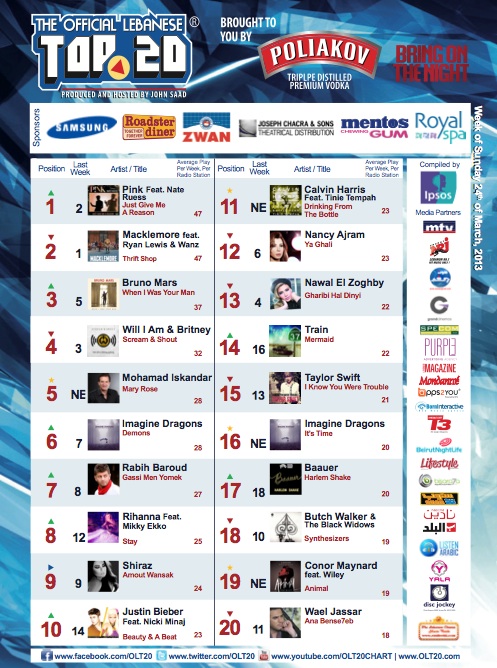 The invasion of the American rappers continues this week on “The Official Lebanese Top 20” with no less than three of them inside the Top 4! With Seattle-based rapper Macklemore at Number 2, Bruno Mars at Number 3, and Will I Am at Number 4, that’s the 1st time such a thing happens! Heavily played on the Lebanese Radio Stations, Rap & R&B are very much ‘on the roll’ lately… Lebanese acts are almost nonexistent with the highest title being “Mary Rose” from our Mohammad Iskandar which only stands at Number 5. Mohammad Iskandar will be next week’s guest on the OLT20 Radio Edition next week.

Congrats to Pink and Fun’s singer Nate Ruess for clinching their first Number 1 with “Just give me a reason” thanks to an average play of 47 plays per week, per radio station as compiled by International Research company IPSOS. On OLT20 this week we have 6 Lebanese artists (from which 3 are inside the Top 10), and 14 Occidental ones!

Among the week’s other New Entries, we have “Drinking From The Bottle” at Number 11 from Calvin Harris & Tinie Tempah, “It’s Time” at Number 16 from American Rock Band Imagine Dragons, and “Animal” at Number 19 from Conor Maynard featuring Wiley. Also note that “Stay” from Rihanna & Mikki Ekko is the “Jump Of The Week” rising up 4 notches to Number 8.

Check the new & complete OLT20 chart by clicking on www.olt20.com now, or via the OLT20 App available for Download on all Platforms.

Finally, note that OLT20 can be heard every Sunday from 6pm on Sawt El Ghad 96.7FM, and every Monday from 7pm on NRJ Lebanon 99.1FM ! – It is also played on daily basis as a compact Top 20 Countdown on MTV Lebanon, and published weekly via all our 21 Media Partners (Dailies, Weeklies, Monthlies, Online, Outdoor, OLT20 Mobile App, and on Locations)