BeirutNightLife.com Brings You the Official Lebanese Top 20 the Week of February 10th, 2013! 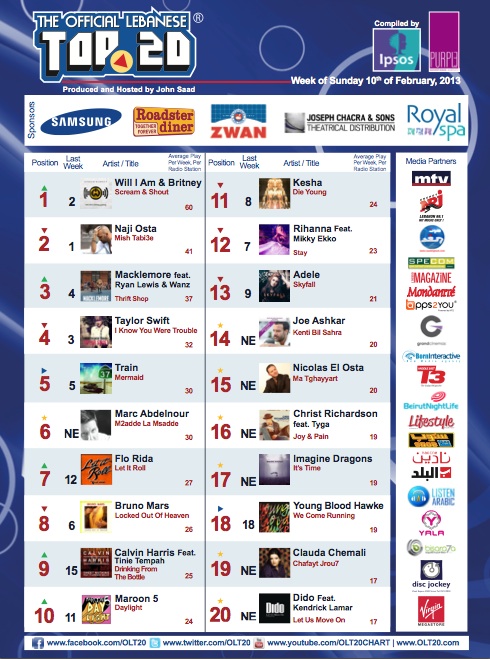 After a relative slow start this year “The Official Lebanese Top 20” is now witnessing some major changes with no less than 7 New Entries, and a new number 1.

To begin with it is worth noticing that the Black Eyed Peas singer Will I Am finally makes it to Number 1 with “Scream & Shout” a duet with non-other than Britney Spears. It’s been quite some time that this song was going up and down the Lebanese Chart. With an average of 60 plays per week and per radio station as compiled by IPSOS, it might also stay Number 1 for yet another week.

From the 7 New Entries of the week, we have “M2adde La Msadde” at Number 6 from Lebanese Composer, singer and songwriter Mark Abdlenoor who was the weekly guest on the OLT20 Radio Show, “Kenti Bel Sahra” at Number 14 from Joe Ashkar, “Ma Tghayyaret” at Number 15 from Nicolas El Osta, “It’s Time” at Number 17 from the American Rock band Imagine Dragons, “Chafayt Jrou7” at Number 19 from Clauda Chemali, and “Let us Move On” at Number 20 from Dido and Kendrick Lamar.

Note that we have 5 songs on the rise this week with the biggest jump coming from singer and composer Calvin Harris featuring Tinie Tempah with “Drinking From the Bottle” which goes up to Number 9. Finally note that this week we have 5 Lebanese Singers and 15 Occidental ones on OLT20.