BeirutNightLife.com Brings You the Official Lebanese Top 20 the Week of April 28th, 2013 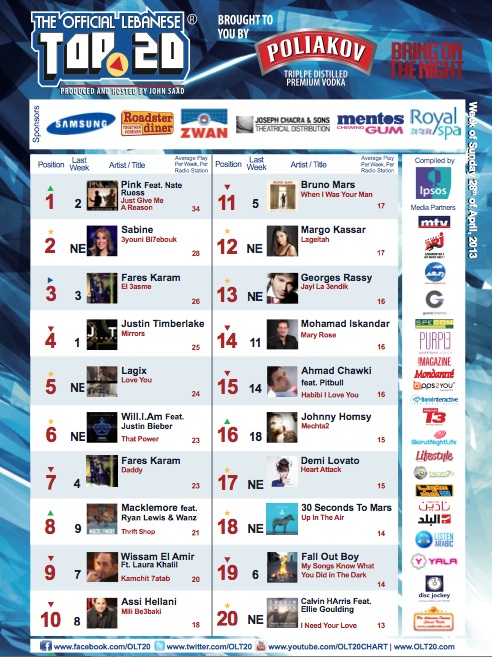 Incredible Pink! After her 3 weeks at Number 1 on The Official Lebanese Top 20, she was replaced last Sunday by Justin Timberlake who only managed 1 week on Top of the Chart, as American Singer Pink fights back again to regain Top Position alongside Nate Ruess (singer from Fun), with “Just Give Me A Reason”. Lifted from Pink’s 6th Studio Album “The Truth About Love”, it is simply the most played song on Lebanese Radios with an Average Play Per Week Per Radio Station of 34 as Compiled by IPSOS.

From the 7 New Entries of the week, “3oyouni Bi7ebbouk” (Music by Melhem Barakat) by Sabine is the highest one at Number 2, followed by “Love You” from Lebanese Act Lagix at Number 5, “#That Power” at Number 6 from American Recording Artist Will.i.am, “Up In The Air” at Number 18 by American Rock band 30 Seconds To Mars, and “I Need Your Love” by Scottish Producer & DJ Calvin Harris & English singer Ellie Goulding.

On OLT20 this week we have 10 Local and Regional artists (from which only 5 are inside the Top 10), and 10 Occidental ones! Perfect Equality! Check the new & complete OLT20 chart by clicking on www.olt20.com now, or via the OLT20 App available for Download on all Platforms.

Finally, note that OLT20 can be heard every Sunday from 6pm on Sawt El Ghad 96.7FM, and every Monday from 7pm on NRJ Lebanon 99.1FM ! – It is also played on daily basis as a compact Top 20 Countdown on MTV Lebanon, and published weekly via all our 21 Media Partners (Dailies, Weeklies, Monthlies, Online, Outdoor, OLT20 Mobile App, and on Location).