BeirutNightLife.com Brings You the Official Lebanese Top 20 the Week of April 21st, 2013 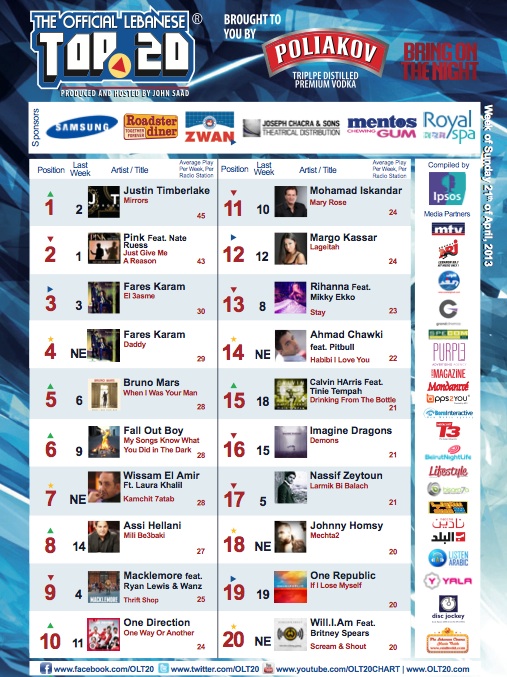 It has become sort of a habit lately, as the Occidental domination over the Official Lebanese Top 20 continues this week as well. Things are about to change shortly though, as the Lebanese acts are fighting back with now 9 representatives in our countdown.

On top of the chart American singer Justin Timberlake succeeds in scoring his 1st ever Lebanese Number One with “Mirrors” taken from his 3rd Studio Album “The 20/20 Experience”. Having spent the last 6 years focusing on his movie career, he impressively succeeds in his come-back to singing as “Mirrors” has so far peaked at Number One in no less than 10 countries around the world!! In Lebanon it is simply the most played song with an average of 45 plays per week, and per Radio station.

From the 6 New Entries of the week, “Daddy” by Fares Karam is the highest one at Number 4, followed by “Kamchit 7atab” from Wissam El Amir & Laura Khalil at Number 7 (both were the weekly guests on this week’s edition ofthe OLT20 Radio Show), “7abibi I Love You” at Number 14 from Ahmad Chawki featuring Pitbull, and also “Mechta2” at Number 18 by Lebanese Music Producer & Singer Johnny Homsy.

On OLT20 this week we have 9 Lebanese artists (from which only 4 are inside the Top 10), and 11 Occidental ones!

Check the new & complete OLT20 chart by clicking on www.olt20.com now, or via the OLT20 App available for Download on all Platforms. Finally, note that OLT20 can be heard every Sunday from 6pm on Sawt El Ghad 96.7FM, and every Monday from 7pm on NRJ Lebanon 99.1FM ! – It is also played on daily basis as a compact Top 20 Countdown on MTV Lebanon, and published weekly via all our 21 Media Partners (Dailies, Weeklies, Monthlies, Online, Outdoor, OLT20 Mobile App, and on Location).