What a Chart have this week! After the very busy last few weeks, The Official Lebanese Top 20 is witnessing another massive change, with some Seven New Entries and a new Number 1. Note that the number of Oriental Acts decreases to 7 this weeks with now some 13 Occidental ones.

After 2 weeks of Top and now almost 600,000,000 views on YouTube “Gangnam Style” from Korean act PSY is replaced at the Top by “Skyfall” the theme song of the 23rd James Bond from English singer Adele. With a very high average play per week per Radio Station “Skyfall” is expected to stay at #1 for at least another week or two!

From the New Entries of the week we have “Don’t you Worry Child” from Swedish House Mafia & John Martin at #20, “Between The Raindrops” from American Rock Band Lifehouse & British singer Natasha Bedingfield at #16, “Million Voices” from Swedish DJ & producer Otto Knows at #9, “Locked Out of Heaven” from American Singer-Songwriter Bruno Mars at #7, and also “Lawwali Albi” from Lebanese singer Salim Assaf at #5.

Check the new & complete OLT20 chart by clicking on www.olt20.com

Finally, note that OLT20 can be heard every Sunday from 7pm on Sawt El Ghad 96.7FM, and every Monday from 7pm on NRJ Lebanon 99.1FM ! – It is also played on daily basis as a compact Top 20 Countdown on MTV Lebanon, and published weekly via all 21 Media Partners (Dailies, Weeklies, Monthlies, Online, Outdoor, OLT20 Mobile App, and on Location)… 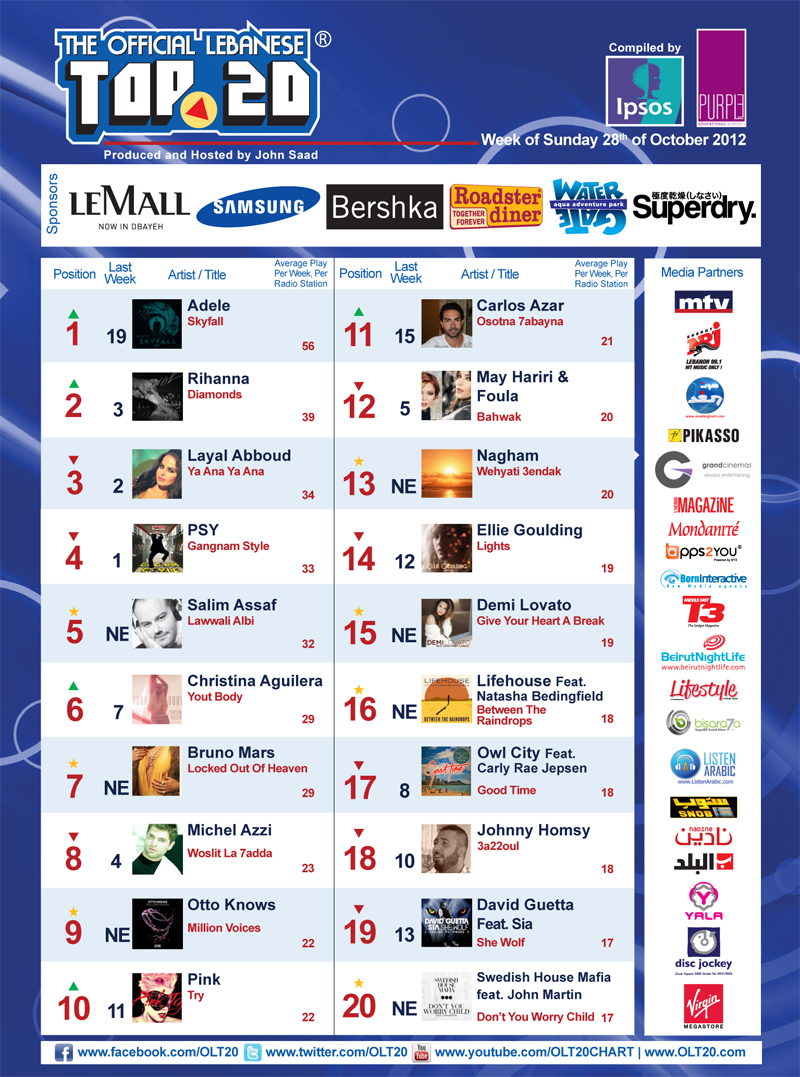