After the big changes of the last few weeks, the same trend continues this week as well in The Official Lebanese Top 20 with no less than 4 New Entries. On the other hand the number of Occidental Acts is rising to 12 in the listings this week, with only 8 Oriental ones. At Number 1, and far ahead of the competition, Korean Act PSY is still in the lead. PSY is not only #1 in Lebanon, but in also 26 other countries around the world. As per the Guinness Book of World Records, the song “Gangnam Style” is now officially the most viewed song on YouTube with now almost half a Billion Views! An absolute record! The jumps of the week “She Wolf (Falling Into Pieces)” which comes from French DJ David Guetta and Australian singer Sia, climbs up to #13. From the New Entries of the week we have “Bahwak” at #5 from May Hariri & Foula, “Skyfall” at #19 from British singer Adele (taken from the Soundtrack of the latest Bond movie), and finally “Spectrum (Say My Name)” at #20 from Scotish band Florence & The Machine.

Check the new & complete OLT20 chart by clicking on www.olt20.com Finally, note that OLT20 can be heard every Sunday from 7pm on Sawt El Ghad 96.7FM, and every Monday from 7pm on NRJ Lebanon 99.1FM ! – It is also played on daily basis as a compact Top 20 Countdown on MTV Lebanon, and published weekly via all the 21 Media Partners (Dailies, Weeklies, Monthlies, Online, Outdoor, OLT20 Mobile App, and on Location). Enjoy the tunes! 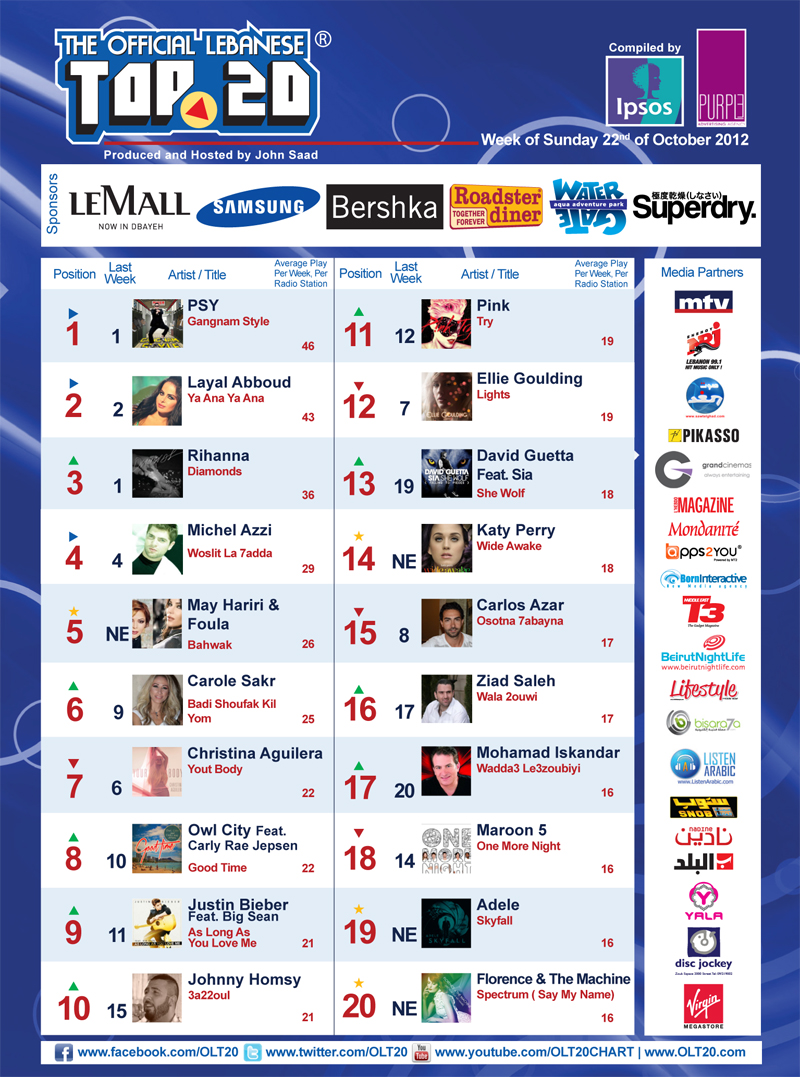