BeirutNightLife.com Brings You the Official Lebanese Top 20 the Week of December 29, 2013 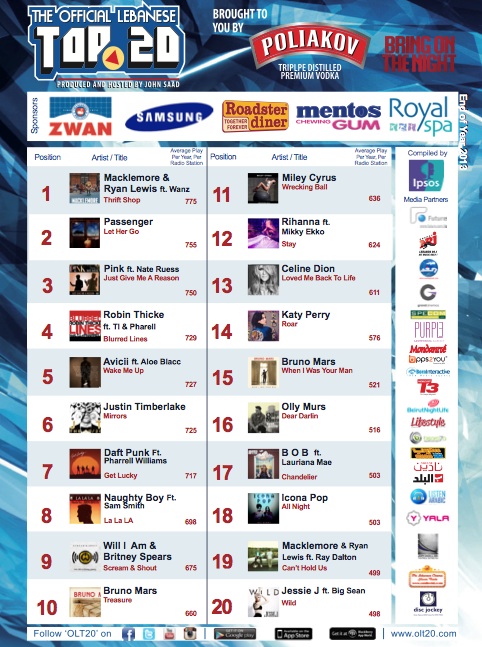 There you have it! The Number one song of the year 2013 is now revealed. It is the most wanted position of all… It simply represents the most played song of the year on the local Lebanese Radio Stations. The artist who’s done it, is the American rapper Macklemore along with producer Ryan Lewis and the voice of rapper Wanz with “Thrift Shop” a song which peaked at number one on the Billboard Hot 100 while selling 7 million copies in total. The song also reached number one in the United Kingdom, Ireland, Canada, France, Denmark, Netherlands, Australia and New Zealand..

Macklemore also managed to score with another song “Can’t Hold Us” at Number 19. He also headlined the famous NRJ Music Tour 2013. From the other big hits of the year we have Swedish DJ & producer Avicii with singer Aloe Blacc with “Wake Me Up” at Number 5, hugely successful American singer-producer Will.i.Am & Britney Spears with “Scream & Shout” at Number 9, American singer Miley Cyrus with “Wrecking Ball” at Number 11, American singer Bruno Mars with 2 songs inside the Top 20, and American rapper Eminem & Rihanna with “The Monster” at Number 18

Note that you can check out the latest videos from your favorite singers on the new TV show “Hits N Bits / OLT20” on Future TV every Friday evening around 11:00pm, and Sunday evening at around 7pm for the re-run. Check the new & complete OLT20 chart by clicking on www.olt20.com now, or via the OLT20 App available for Download on all Platforms.