BeirutNightLife.com brings you an exclusive interview with AKON executed by RAGMAG Magazine 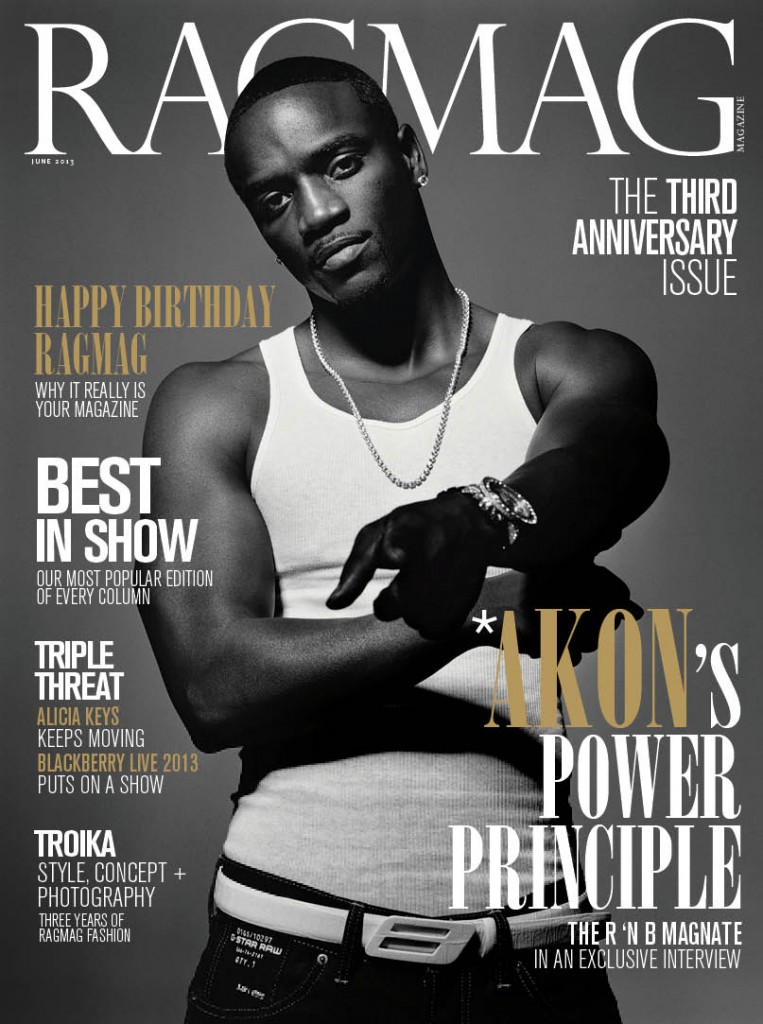 BeirutNightLife.com brings you an exclusive interview with AKON executed by RAGMAG Magazine. The R’N B Magnate was interviewed by RAGMAG Magazine before the much anticipated concert brought to you by Poliakov Vodka in collaboration with Radio One this June 22nd, 2013 at Forum De Beyrouth..

More info about the concert: https://www.beirutnightlife.com/events/calendar/poliakov-vodka-proudly-presents-akon-live-in-beirut/

THE HIP HOP MAGNATE IN AN EXCLUSIVE INTERVIEW

“Can I be your Hype-Girl?” That’s literally the first thing I ask when I interview Akon. Yes, laugh. I mean the RAGMAG staff certainly did. I even started a hashtag on Twitter that said #AkonAndFidaLiveInConcert. While I had some viral action going on, the more popular hashtag turned out to be #AkonLiveInLeb. “I can’t sing, but I’ve got swag,” I say hoping to convince the R n’ B sensation, and believe me I exude a lot of enthusiasm. “Just during ‘Right Na Na Na’ and I promise I’ll own it!” Akon laughs and gives me a little bit of hope as he explains, “Man, I’d let you come on stage, but I already have the best Hype-Man. My DJ, Benny-Demus may not take too kindly to you coming onto his turf!” Turf nothing- I’m a kill shit, I say to myself in my best gangsta inflection. I’ve still got about two weeks left to scheme and cajole my way into my new career as Akon’s Hype-Girl and I’m not giving up, all I have to do is make sure DJ Benny-Demus mysteriously disappears for a song or two. I have a sliver of hope that by the time you’re reading this interview I’ll get confirmation from Akon’s peeps that I will be his Hype-Girl, at least for one catchy song on June 22, 2013.

So rather than sing, “Konviccttt, musiicccccc” at Akon for a demo, I get down to business and really start to interview the star. He’s a bit of a tough cookie, and he’s a lot more careful than you’d think. He opts out of answering a few questions, like whether he’d side with Tupac or with Biggie Smalls, and declines to comment on the Eastside-Westside thing. Other questions he navigates like a PR pro. Sometimes he’s shockingly honest and sometimes he throws me for a loop. About his music, he is simply grateful that he’s become one of the world’s most recognizable musicians. What did it feel like to get nominated for a Grammy alongside some of the most established artists in the biz? “My first Grammy nomination was for Best Rap/Sung Collaboration for ‘Smack That’- it felt incredible,” he says. The hit song was one of five Grammy nominations, one of which was for “I Want to Fuck You” with Snoop Dogg and also in the Best Rap/Sung Collaboration category.  In 2007, Akon had officially made the A-list, having won “Artist of the Year” at the Billboard Music Awards. His list of accolades is too long to mention here, but in addition to skyrocketing sales for every record release and every single release, Akon moonlights with the who’s who of performing artists. One of the most significant tracks in Akon’s catalogue is his collaboration with the late, great Michael Jackson on the song “Hold My Hand”, the collab was recorded in 2008 and charted top 20 in a multitude of countries. A bevy of reports state that Akon and Michael were more than colleagues, they were also close friends. Akon confirms this saying that, “Mike is the King of Pop, and I think that it’s a dream come true for any major artist/songwriter/producer to be able to work with the best in the business. When I first flew up to Vegas and met him it was almost like we’d known each other for years! Literally! ‘Cause musically we were on the same exact page! The chemistry was just incredible! And, as a person, he was the most cool, humble dude I’ve ever met!” This is what Akon is like when he really meshes someone, 100 percent in league with them. 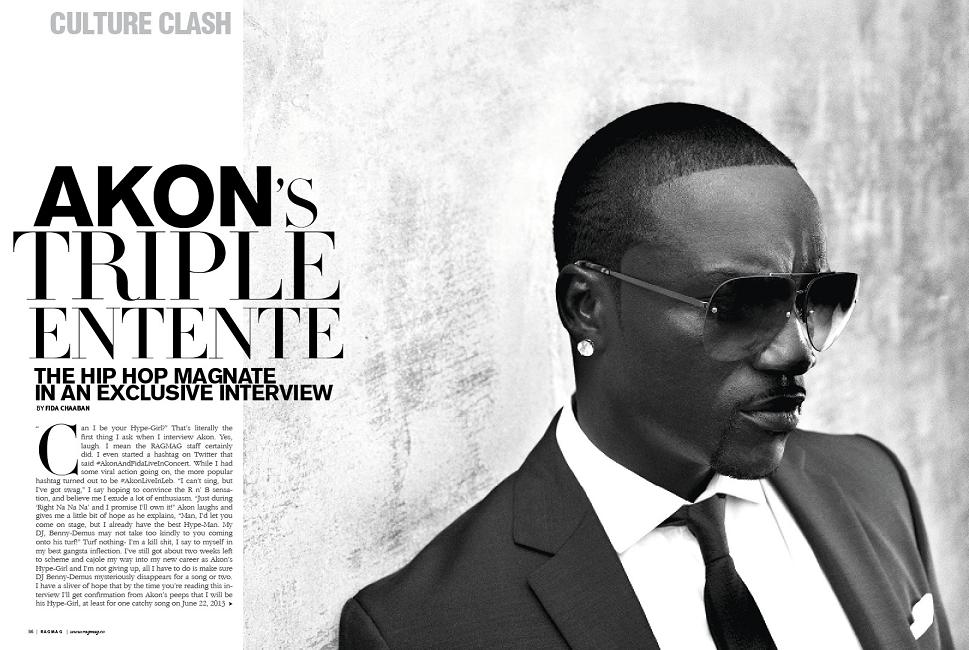 Akon is the same way with other artists that he’s tight with, no matter who I bring up, Akon reinforces the contribution Snoop Dogg, rapper and sometime soccer-dad, has made to his career. When I suggest that performing with arguably the two biggest rappers in the world, Eminem and Lil Wayne, is a huge feat, he reverts back to Snoop saying, “I’ve been very fortunate to work with so many talented Hip Hop artists. Eminem and Lil Wayne are definitely on top of their game, but I’ve also had some great collaborations with Snoop and Young Jeezy.” Dude, what about Eminem? I tell Akon that another of his tier one performing buddies, 50 Cent, said that “The best rapper is a white guy,” in a widely publicized quote. Akon is pc here, but still affirms Fiddy’s statement: “I’d definitely agree that he is one of the top rappers alive today. Eminem is a lyricist and an incredible producer. He can take any topic and make a song out of it. I haven’t seen an artist do that and outsell everybody. There are times when I’m in the studio with someone and the chemistry just clicks. That happened with Em and the response to the song was unreal,” he says. Can we expect another collab with “Em” soon? “I would definitely be open to working with him in the future if the opportunity came around again.” He stays mum on the subject of his newest work, declining to comment, nor does he address the fact that’s he’s gone multi-platinum many times over. We’ll just have to wait and see what he’s got up his sleeve. Instead Akon talks about Lebanon and his upcoming concert at the Forum de Beyrouth saying that, his “fans can expect a high energy performance. We make sure the crowd gets up out of their seats and dancing the entire time. We’ve got a lot of surprises in store for the long-time fans and some new songs that you’ll be hearin’ off my upcoming album,” and that’s as much as Akon will tell me, even when I press for more information.

At this point, I take his cue and move on to the personal side of the R ‘n B artist’s life. He is generally positive when he talks about his kids, saying that the “relationships with my children are very important to me. They are who inspire me to keep doing what I am doing.” And his own childhood, reportedly he had quite a difficult time? “When I first came to the States, I didn’t speak English and the culture was different. The way kids dressed was completely different so I would get teased a lot. I got into a lot of fights growing up, but going through those experiences [was] what laid the foundation for the man I am today.” The man he is today is also super reserved about discussing his love life: “That’s something private for me. Let’s just say I’m not lonely,” Akon says with a bit of mischievous bite. Some of the things he won’t respond to are the detail-oriented questions. TheSmokingGun.com has previously poked more than a few holes in Akon’s official story about his criminal history, his age and even his legal name. A quick Google search will tell you that he’s got over five variations of his full name, and he doesn’t even acknowledge the question when asked. On the subject of his age, Akon says that date of birth isn’t important, “Age is just a number. I just don’t feel like it’s relevant,” or perhaps because both his legal name and his DOB can be used to access his court records regarding past charges and even his immigration history from Senegal to the United States. “I spent my early childhood in Senegal and then came to the States when I was seven,” and that’s the clearest statement he’ll make about his childhood. Otherwise, he mostly discusses the musical influences of his youth: “My father is a jazz percussionist and growing up there was always music around us. I would listen to everyone from Stevie Wonder to Steely Dan to Bob Marley. When I came back to the States that’s when I was introduced to Hip Hop. At first I didn’t like it, but after I listened to the lyrics I started to understand what they were rapping about.” It’s a good thing he did, as it shaped the whole direction of his wildly successful career. And the criminal past? No one is sure, since depending on which source you cite, you’ve got everything from drugs to car theft rings to trafficking. 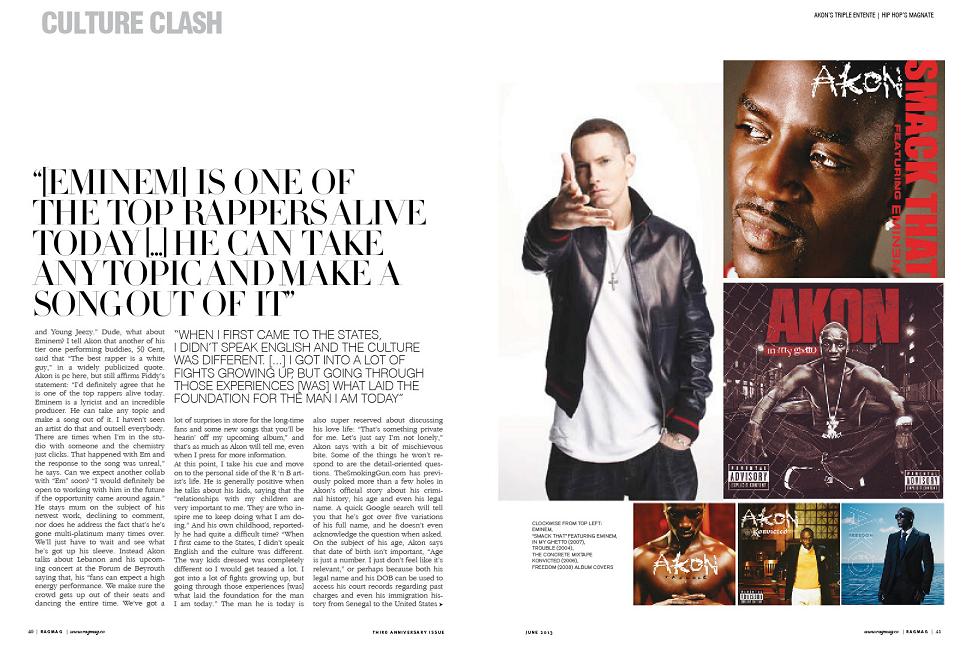 An article in the “New York Times” called Akon the “prison obsessed” R ‘n B performer, and his Konvict music tagline is one of the strongest identifiers of Akon’s branding, reinforced by the slamming jail cell, his trademark sound. On some level, Akon can be called the modern day Man in Black -Johnny Cash circa his “Folsom Prison” days. It was wholly unheard of for a popular performer to sing from a sympathetic prisoner perspective and Johnny was the jailbird voice- Akon follows a close second with prisoners all over the world playing “Locked Up”, his hit single featuring rapper Styles. “That’s an interesting comparison, but Johnny Cash is on a whole other level,” he says modestly. “For me, being locked up is what helped put me on the path to where I am today. I knew I never wanted to be back in that place. As far as the single ‘Locked Up’, when I was first trying to get my music heard on the radio and we weren’t getting much traction, the song was actually becoming popular in the prison communities,” he continued unapologetically. “It became like an anthem for the inmates and when we did the penitentiary tour it was unreal. There was this underground movement that just made the song a hit.” By underground he means people behind bars. Or people who’ve been behind bars. Or people who know people who were behind bars. And that’s where it started, in case you didn’t know.

I’m not a “Konvict” and I haven’t been locked up, but then again, I’m not sure that Akon quite fits the bill either. It doesn’t matter- what does matter is that Akon is going to go live in Lebanon. Prepare yourselves, because I’m already practising my Hype-Girl routine: “Put yoo hands up in da air, put ya hands up in da air!” Cue the cell door. It’s the sound of metal on metal and it’s going to be up close and personal, Hip Hop style.