Beirut is in the Eye of the Beholder: What’s the Knooz? 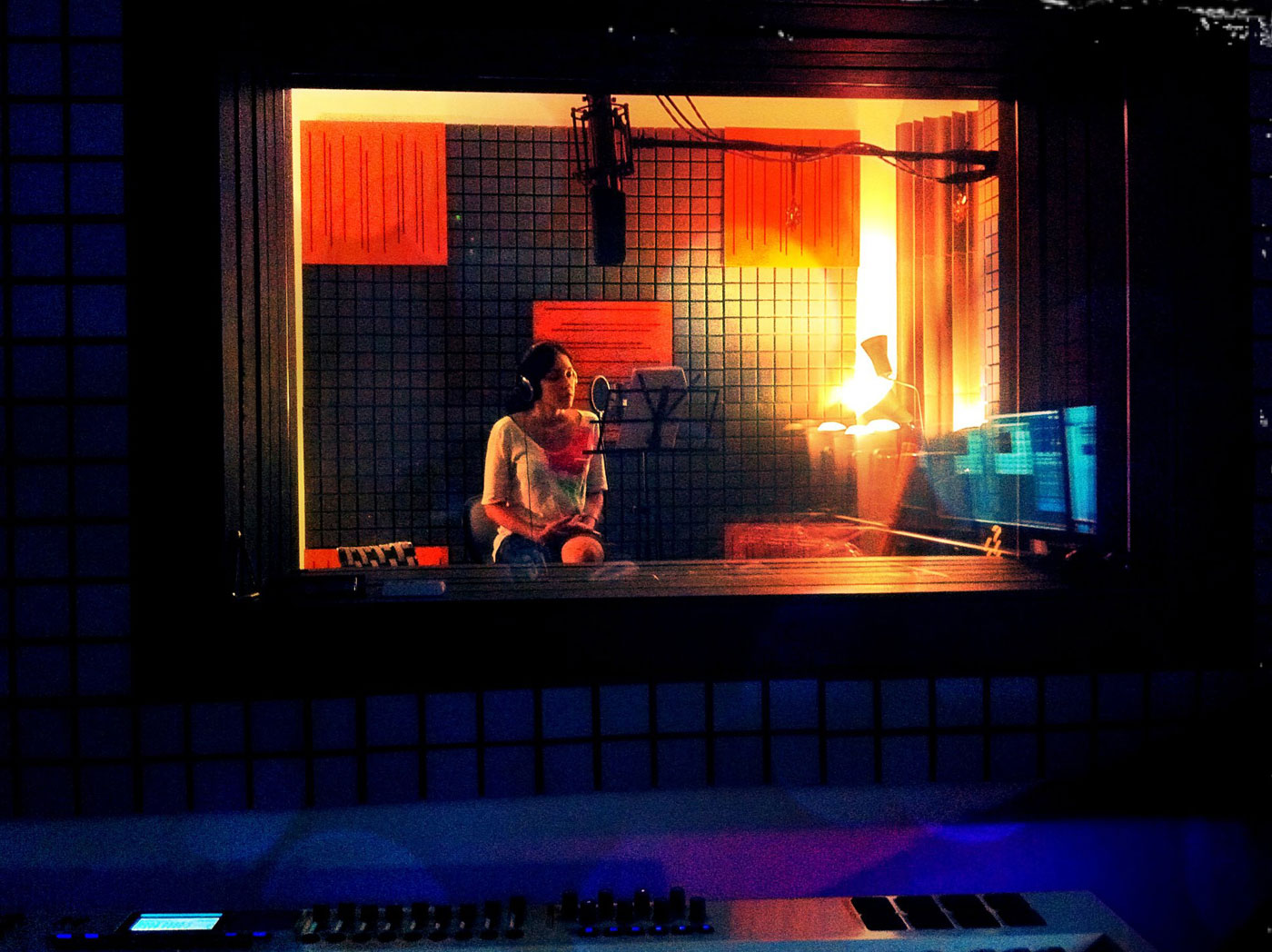 Have you ever heard a story from a taxi driver or an old lady and wondered about how much of it was true? And how many other stories like it were out there? Have you also noticed how in the Middle East we are all about stories? We have a glaring lack of research, but so so SO many stories that we hear from our neighbors, friends, people on the street, grandparents, visiting uncles and basically everyone else.

Tamara Qiblawi noticed these things and decided to start Knooz Room, a website that collects spoken-word stories and tries to fill the gap in the underdeveloped local research sector. On the Facebook page, it’s described as “digital story-telling form the Middle East.” The site was just launched and it’s already receiving a lot of attention.

One of my first questions was, how do you pronounce “Knooz”? Apparently it’s optional. In English it can be read as “news”, and in Arabic it’s just like it’s spelled, “knooz”, which means “treasure”. It’s a reflection of the way Knooz Room works, seeking small gems and showing us that just as you often have to dig deeper to find a treasure, you need to dig deep to find the truth.

The website posts audio recordings. There are “series”, each centered around a certain topic or theme, which are diverse and often about things we seem to hear a lot about but don’t necessarily have much research on — such as music, borders and spies. Each series has 3 episodes and each of the episodes deals with a different aspect of the theme.

Each episode is an audio clip, but it’s made really clear with a rolling transcript that works like subtitles, plus visuals, links and references. There’s going to be vivid moving images, maps, and all kinds of other visuals to keep people’s eyes happy while they listen.

Tamara explains that Knooz Room collects oral narratives in order to get a new understanding about certain ideas. In this part of the world, we often don’t have solid knowledge, or proper research. But we tell stories. She is recording these stories so that we can all gain from them, and use them as a basis for future reference before they are lost with the people who tell them.

“Oral culture is very strong here. You can sit and have an intellectual conversation with a taxi driver, or with someone who’s illiterate. They all have stories,” Tamara says.

Everything is also broadcast in English and Arabic to give everyone an opportunity to understand and take part. She’s a big fan of audio because as she puts it, “it’s an economical medium” so you can spend more time focusing on what you’re saying, instead of how to say or edit it. But she’s making the audio more interactive to add to the experience.

She came up with the idea while she was in the US doing her masters at Georgetown University, and listening to a lot of podcasts, and realizing how convenient and informative they are. “I found there was a lot of very good content coming out of that. Audio is also cost-efficient and you can focus more on the quality of the content,” she says.

Tamara returned to Lebanon knowing she wanted to do podcasts in the country and idea was a work in progress until she moved to these kinds of “docu-narratives”, where it’s story-telling but also discovering something new. Tamara credits her amazing coder for making the website so great, and her team in general for their hard work.

“The aim of the episodes is to make the listeners learn something new, to shift their understanding by the end of the episode,” Tamara explains. Creative Expression and Identity is the first theme and features interviews with musicians Mashrou’ Leila and Munir Khauli. 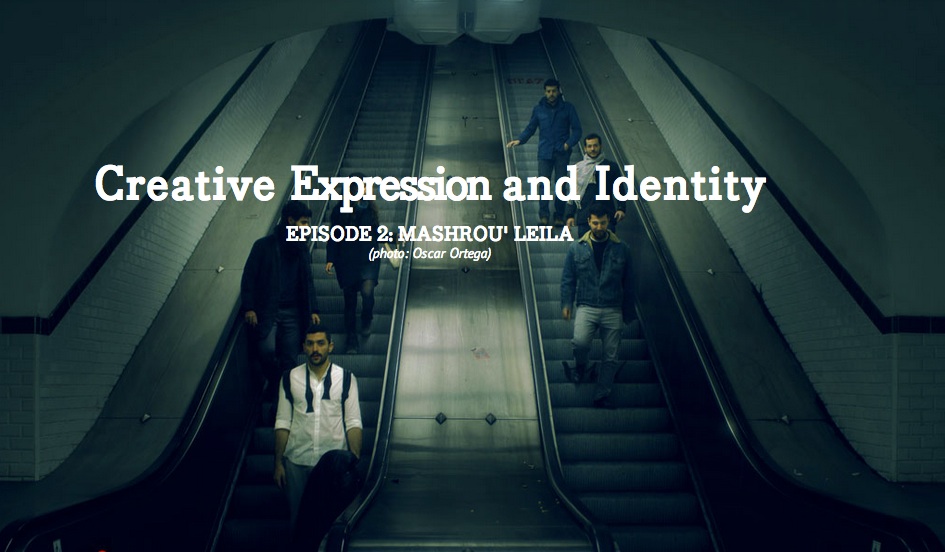 This series focuses on the fact that in the West, art and music are very different from the East, and they are hard to blend together. But more and more with globalization, the youth especially are having a hard time identifying themselves with one or the other. They are both East and West, and can relate to both. Khauli, for example says in one episode that traditional Arabic music is very folkloric and makes you want to get lost. On the other hand a lot of Western music instigates change and calls people to action. This means Arab musicians who want to speak about change often need to get out of the Arabic “tradition” in order to do what they want, moving towards more Western types of music like Rock and Rap.

These are the kinds of stories and analyses Knooz Room is looking for, says Tamara. Not necessarily the typical research from academics, but from anyone with influent experience with the subject.

One future series will have to do with the debate about “borders”. Throughout history people have been separated by somewhat artificial borders, but what about the stories of people who live on those borders? The team is talking to individuals who live in 3 different areas: the Lebanese/Palestinian, Lebanese/Syrian and the Jordan/Saudi Arabian border, to get their stories and ideas on the subject.

Another upcoming series is on espionage. So many of us have heard stories and rumours and myths of people being spies and secret agents. What’s the truth? The Knoozers will record stories to compare the mythology vs. the reality. 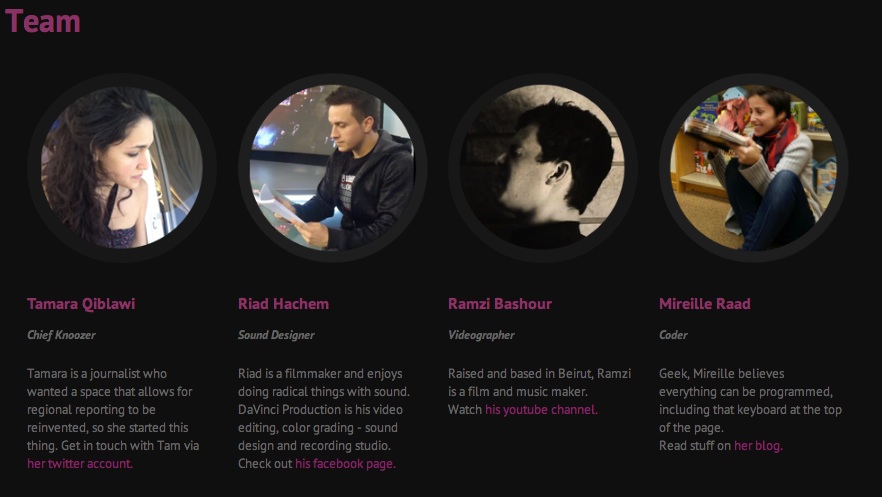 This is just a taste of what’s to come. A beautiful idea of spreading ideas in a very “knoo” way. Using audio is cost-efficient, so the Knooz team can focus on the content. They’re making everything bilingual and decorating the sounds with transcripts that you can read along with, in addition to posting links that you can go to for further reading. If we record enough stories we can build on this knowledge and the oral tradition in the Arabic world, instead of possibly losing it with time, and losing the treasures of our vast oral history. Knooz Room embrasses and utilizes our oral culture to bridge the gaps in our underdeveloped research sector, and tells us fascinating tales in the process.