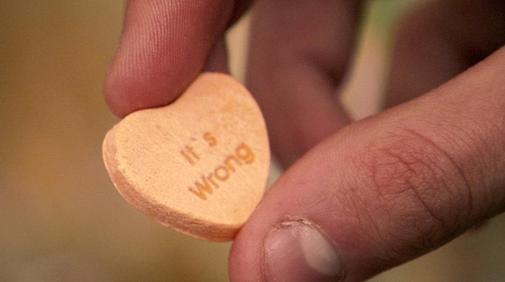 Ah relationships… those scary yet beautiful mazes of complex human emotions and interactions! When they go right, they lead to incredible life-long unions of souls, bodies and minds. But when they go wrong, they can go really really wrong! Now that Valentine’s Day is creeping around the corner its more important than ever to be on your best behavior. Whether you’re a man or a woman, the “most romantic day of the year” is also the one with the most tensions. And boy can it go wrong! Avoid the pitfalls of romance this Valentine’s Day and listen to these words of advice on what not to do:

Now that you’re reading this there’s no excuse. Valentines Day is on Friday, February 14. Write it down.

If you’re in a relationship its best to assume you will celebrate Valentine’s Day together. There are actually couples who don’t believe in the holiday and chose not to celebrate it at all, but these are few and far between. Chances are, even if your girlfriend (or boyfriend) says they doesn’t care about the holiday they’ll be smiling from ear to ear at the sight of a gift. Yes you can celebrate your love year round and you don’t need this commercial holiday, but it’s as good a day as any other to celebrate your love, isn’t it? And who said the gift must be store-bought and expensive? So clear your schedule on that night in advance and prepare something thoughtful, whatever that means for the two of you.

Don’t let it be a first

There’s enough pressure out there for couples as it is. First dates are sometimes the toughest moments, and the stress of having that fall on the most important day for lovers might be just too much. There’s gooey affectionate couples everywhere, people expect you to be romantic, and you don’t know each other so you have no idea what to expect, and what to offer. Give this date a fighting chance and avoid Valentine first dates!

…for the first time, that is. As with the previous rule, there’s enough pressure as it is. Don’t take such an important step and say “I love you” just because it’s V-Day, say it because you mean it. These special words should only come out when you really mean them, so unless you do don’t feel forced to say anything. Plus, isn’t it a bit cliché?

When people are under pressure they tend to blow up! You might get angry at restaurant staff for getting your reservation wrong or spilling a drink, or you could even be tempted to fight with your partner. Whether it’s something that’s been festering in your relationship for a long time, or someone is not happy with their Valentine’s Day gift, try to keep the peace and make an extra effort to be nice to everyone. There’s a tendency to take it harder and more personally since it’s a big lovey dovey holiday, but enjoy the day and the experience as much as possible with no drama.

Don’t get a ring unless you’re proposing

When it comes to choosing gifts for a woman, learn this one rule: if it’s a ring, they will associate it with a marriage proposal. So, if you’re not actually proposing this could be a big problem. Earrings are great.

For goodness sake, pick another day to do this! There are 364 to chose from! This is hugely inappropriate and you can certainly have the big talk and/or fight about the important issues in your relationship when you need to, but think long and hard about whether you really need to on this day.

Put the phone down and get a grip! The sight of all the happy couples and romantic movies on TV might make you panic and consider going back to an ex, but this is probably a terrible idea. Remember why you broke up in the first place and if the reason still stands then definitely avoid the emotional roller coaster you could be in for. It’s better to be alone than with the wrong person – that holds true all 365 days of the year.

Newer Post BeirutNightLife.com Brings You the Official Lebanese Top 20 the Week of February 9, 2014
Older PostAlfa signed an agreement with the Red Cross to sponsor the new “NAJAT” application