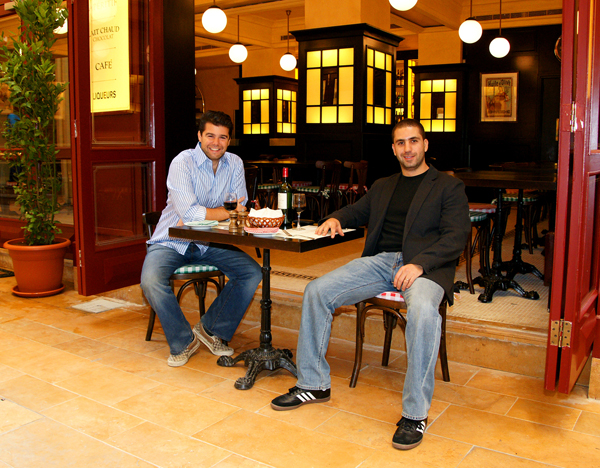 Patrick Cochrane and Ziad Kamel began their successful business partnership in 2003, when they organized NYE events at the Sursock Palace for four consecutive years. They went on to establish The Alleyway Group in 2005, in which Kamel resides as CEO and Cochrane as COO; ever since, they’ve been opening one fantastic outlet after the other. After launching two of the most popular bars in Gemmayzeh at the time, Gauche Caviar and Cloud 9, the duo developed The Alleyway. After renovating the neglected area, they turned it into a charming, cozy, scenic alleyway boasting a French bistro, Couqley; a clothing boutique, The Union; and The Tanning Salon. Their most recent projects are The Angry Monkey in Gemmayzeh, which received instant popularity, and Amarres in Zaitunay Bay, a French restaurant which will surely receive acclamation just like The Alleyway’s outlets that preceded it.

Since the duo clearly made an impact on Lebanon’s restaurant and bar scene, BeirutNightlife asked Patrick Cochrane a few questions regarding his and partner Ziad Kamel’s success with the Alleyway and their ventures.

How and when did you get the idea to start up The Alleyway Group?

When Ziad Kamel and I first decided to open a pub in Gemmayzeh, we looked at a location inside the building that would eventually become The Alleyway. We noticed that all the ground floor shops in the building were vacant. We both knew immediately that the best thing to do would be to rent out all the locations ourselves and develop the entire ground floor with a variety of businesses that would be complimentary to each other. This is why we have a good mix of nightlife, retail, dining and beauty. This collection of businesses eventually became The Alleyway.

Why did you pick Gemmayzeh as a location?

At the time, Gemmayzeh was the up-and-coming nightlife destination in Beirut, so it made sense to be located in this area. The Alleyway building is owned by my family, but at the time was not bringing in any rental revenue, so it was a perfect opportunity for everyone.

What is the concept behind The Alleyway?

We wanted to create a unique destination within Gemmayzeh; a single location where you could have a drink, do a bit of shopping, eat and also pamper yourself. Our concept was “Look Good! Feel Good!”

Which of your outlets is your personal favorite?

There was approximately one year between the openings of each of The Alleyway outlets. I think each outlet we opened reflected an important part of our characters at that particular point in our lives. When Gauche Caviar opened, it was loud and crazy and it reflected my character then. A year later, I had mellowed out a bit and preferred the lounge concept of Cloud 9. By the time we opened Couqley, my perfect night out was a casual dinner with friends over great food and wine. Now my favorite is The Angry Monkey. It combines the best aspects of all the previous businesses – it’s cozy, relaxed, friendly and has a great atmosphere even when half full or totally packed.

Do you believe that Gemmayzeh is still a top nightlife destination in Lebanon? (If not, what do you believe is taking over next?)

There is no doubt that Gemmayzeh is not the same place it was 5 years ago. It’s is evolving, and I’m happy to say for the better. There are fewer bars and more shops, restaurants and cafés. I like the way it’s progressing. It got to point a few years ago where there were just too many pubs on the street.

There is no longer one single nightlife destination in Beirut/Lebanon. Before, it used to be either Gemmayzeh or Monot. Nowadays there are multiple areas offering very different experiences; Hamra, Gemmayzeh, Downtown, Jounieh, the soon to be opened Zaitunay Bay, and the nightclub area around Pier 7 and White. This is a really good thing as it offers more variety.

What is your opinion on Lebanon’s nightlife scene compared to other countries?

I personally think Lebanon’s bar/pub scene is probably one of the best I’ve experienced. The number and variety of pubs/bars is astounding and the atmosphere in many of them is remarkable. I don’t think I’ve ever witnessed anything like a Wednesday night at The Angry Monkey. It’s as if 150 best friends all decided to come and party in the same place at the same time!

Unfortunately the same can’t be said for Lebanese nightclubs. Design-wise they are among the best in the world. However, I feel they lack energy and ambiance. In bars/pubs, people are much more relaxed and are usually having a good time. In nightclubs, too many people just look bored. It’s not surprising really as there’s very little interaction between people. Everyone seems to be standing around looking at one another. As Lebanese clubbers, I think we should pay less attention to how we look and more attention on having a good time.

Other than Amarres, the new French restaurant you opened on the Beirut Waterfront’s Zaitunay Bay, do you have any upcoming plans?

Amarres and the Zaitunay Bay development is a huge and exciting project. As a group, we are constantly on the lookout for new opportunities and seeing how to expand our existing business to other markets.

We recently closed Cloud 9 and reopened it as The Angry Monkey which is doing great. Now we are working on a renovation plan for Gauche Caviar which should be reopening in early 2012.

Having people like Patrick “Paddy” Cochrane and Ziad Kamel working in Lebanon’s hospitality industry is a reassurance that the restaurant and bar scene will continuously develop and improve, constantly surprising us with cool new places and ideas that not only receive praise from Lebanese people, but are also given international exposure by those who visit Lebanon and carry memories with them back home.

BeirutNightLife wishes the dynamic duo the best of luck on their new and upcoming ventures.