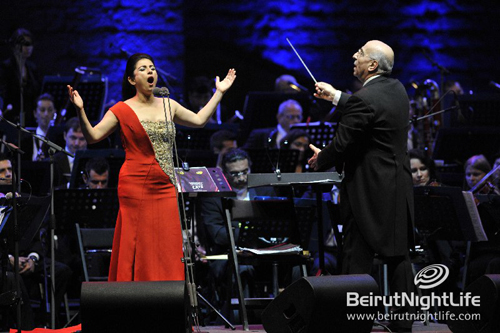 The Beiteddine Festival, one of the leading festivals in the Middle East, opened the season with the renowned musicologist Walid Gholmieh conducting the Lebanese Philharmonic Orchestra accompanied by the soprano extravaganza the Diva Hiba Al Kawas.

The festival takes place in a large and magnificent 200-year old Palace in the Chouf mountains, in Lebanon. The opening was attended by Ms. Noura Joumblat, president of Beiteddine Festival Committee, and a number of government officials including Lebanese Minister of Interior Ziad Baroud, Lebanese Minister of Communication Tarek Mitri, and former Prime Minister Fouad Al Saniora.

Each year, in the months of July and August, the Festival presents outstanding performances by world famous stars and Lebanese artists. In 2010,the Beiteddine Festival celebrates its 25th anniversary… born during the war, in 1985, the Festival has developed, with time, into an international event, and is today the most attended Festival in the region, drawing tens of thousands of spectators every summer into the palace’s beautiful court yards.