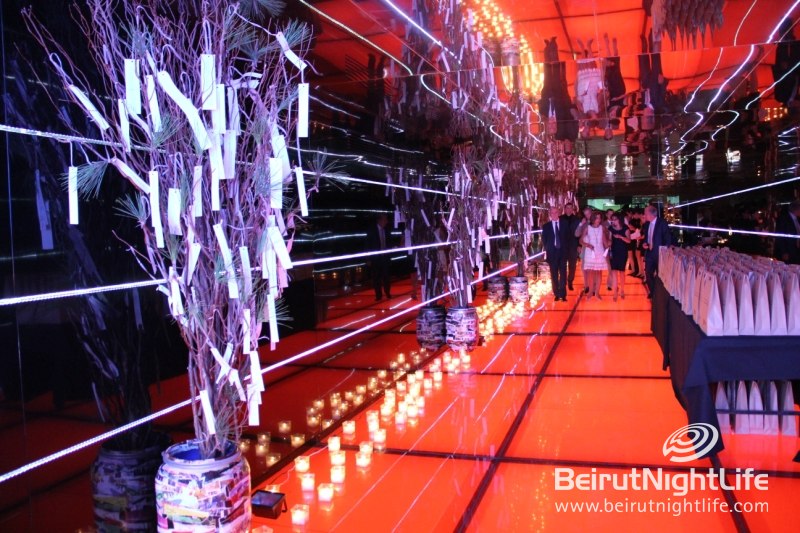 The Lebanese organisation Jouzour Loubnan organised its second Gala Dinner at Pier 7, to gather funds for its plantation campaigns across Lebanon.

Organised under the high patronage of HE Ms Milagros Hernando, ambassador of Spain to Lebanon, this event was chaired by Mr. Raoul Nehme, president of Jouzour Loubnan, in the presence of HE Mr. Patrice Paoli, ambassador of France to Lebanon, General Hughes Delors-Laval, UNIFIL Chief of Staff and Père Selim Daccache, Dean of Saint Joseph University.

This event brought together more than 500 guests during the dinner and around 700 people for the dancing evening which followed.

Mr. Nehme explained that in Lebanon, in the last 40 years we lost more than 40% of our woodland cover, As a result, our children and grand children will have to pay a dear price because we lived well beyond our means. Hence, Jouzour Loubnan is making its own contribution to Lebanon. « We’ve planted, irrigated and protected 60000 trees so far, but is it enough? » Nehme asked us, « of course not, and this is why we are planning, to plant over 30,000 trees this year, with your support » he affirmed.

Ms. Hernando, ambassador of Spain to Lebnaon, recalled that Spain, like Lebanon also suffered from deforestation and has started a reforestation process “I am particularly happy that these projects include the participation of the youth, which in return makes them more aware of the real value of the trees that should be treated as living beings». She also insisted that « Spain is both committed to Lebanon’s peacekeeping and development ».

This evening has enable Jouzour Loubnan to collect the equivalent of the amount necessary to plant 10000 trees and ensure their maintenance over at least 3 years, in order to restore the woodland cover of Lebanon and raise awareness on the preservation of our natural resources amongst the youth.

In total, and since the commencement of its activities, Jouzour Loubnan has planted 60000 trees, from more than 20 native species, in 8 different regions on throughout the Lebanese territories.