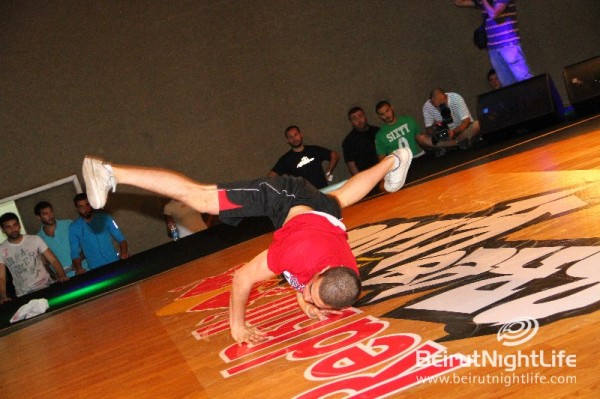 For the second year in a row, break dance and hip hop music lovers in Lebanon witnessed the strongest and most exciting dancing duals at the Red Bull BreaKing event. The competition was held at Estral cinema theatre in Hamra in an amazing atmosphere where B-Boy Edmond Akl beat B-boy Ralph Kabalan at the final “battle”. They will both represent Lebanon at the regional finale in Jordan.
Akl known as “B-Boy Monix” won after a fierce 3-round dual against Kabalan or “B-Boy Ralph” who kept his runner-up title as he also lost the Red Bull Breaking final last year against Ahmad Kurdi. Kabalan was very close to winning as he took his revenge from Kurdi in a very exciting semi-final that roused the crowds gathered at Estral Cinema.
South Korean Hong 10, champion of Red Bull BC One 2006, the most prestigious break dance competition in the world, judged the competition and graded the candidates after each dual. 32 of the best Lebanese B-Boys competed on a K.O basis where the winner of a dual eliminated his rival and moved to the next round. The level went up progressively to reach its utmost in the final. The shows consisted of still positions on one hand or both hands as well as exceptional jumps and amazing moves on grounds.
The Red Bull BreaKing event was presented by MC Moe and featured Hip Hop music shows by local artists Malika, RGB 961, MC Zug, and Ed&Chino, while DJ Lethal Skills handled the music.
19-year-old Akl expressed his overwhelming happiness and described his victory as “a dream come true”. Monix, who is a Business Management student at La Sagesse University, asserted his will “to seriously compete in Amman and try to grab the regional title to raise the Lebanese flag on both regional and international levels.” “Lebanese champions Monix and Ralph have a great chance to win the regional title of Red Bull breaking in Jordan” stated judge Hong 10 who was impressed by the high level of performances.
The local Red Bull BreaKing is part of the regional qualifying carried out in the Middle East region for the second year in a row. Participating countries are Lebanon, Egypt, Oman, Qatar, UAE, KSA, Kuwait, and Jordan. The regional champion will have the chance to compete next year at the Red Bull BC One and will travel this year to Moscow, Russia to attend the competition finals and watch the best international B-Boys compete for the ultimate title. Current champion Abdul Rahman Hammud (KSA) experienced that last year after winning the regional Red Bull Breaking 2010.