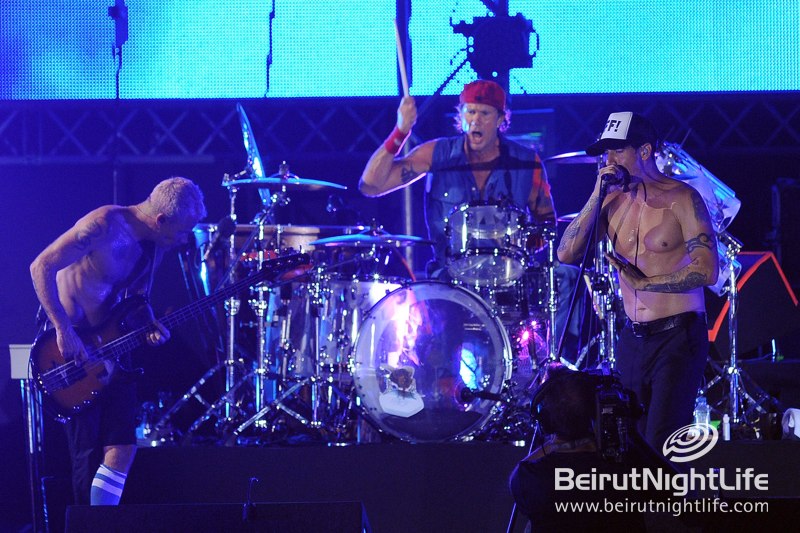 The world famous rock outfit the Red Hot Chili Peppers hit the stage with a bang! No later than 10 o’clock Anthony Kiedis was just a few feet away from the crowd, shirtless and rocking his signature trucker hat. I could tell he was ready to rock the packed stands at the Beirut Waterfront. The band began with familiar RHCP songs off one of their older albums, then went straight into crowd pleaser “Snow”, “heyo listen what I say oh”… Anthony welcomed a crowd sing-a-long as famed bassist Flea showed off his well-known and admired bass lines. All hands were up in the air, in front of the barricade near the stage, as Flea continued plucking away at his bass. Drummer Chad Smith joined in for a drum and bass solo.

The crowd went wild once again but this time for hit song “Otherside” followed by “Around the world”. Flea grabbed the microphone as Anthony Kiedis help our Lebanese flag up. Flea graciously thanked fans letting us all know that the band was having a wonderful time in Beirut! “Can’t Stop”, another hit everyone in the stands recognized went off,  followed by “Throw Away Your Television”. Flea let fans know, every note they played he wished everyone in Beirut Peace and Love…Anthony, on a lighter note, wished everyone in a crowd would have a skate board and cool earrings…Hey thanks guys!

Also, big thanks for the rock jams that continued throughout the epic concert. A set that was over an hour and a half long…heck yes! RHCP slowed it down a bit with a ballad, until the Chili Peppers took us to a place we love, as they performed “Under the Bridge”. Everyone in the stands were in no way seated, after all how could they sit during such a performance. Fans snapped photos as Flea rocked another incredible bass solo that headed straight into “Higher Ground”. Girls hopped on men’s shoulders for a closer look and of course to sing along to “Californication”. Some danced, some sang, some snapped photos but literally everyone at Waterfront rocked as the Red Hot Chili Peppers played the music all rock fans in Lebanon have been waiting for. One thing I didn’t see was a mosh pit. I wonder how that would go over with the, actually friendly, security guards who assured safety all night. 11:11pm make a wish…for those who wished the show not to end, wish granted….Encore! The guys came out answering to the crowd chant “we want more”.

During the show I saw a RHCP shirt that said, “I’m with you Lebanon”, well guys, we are with you too. Rock on!