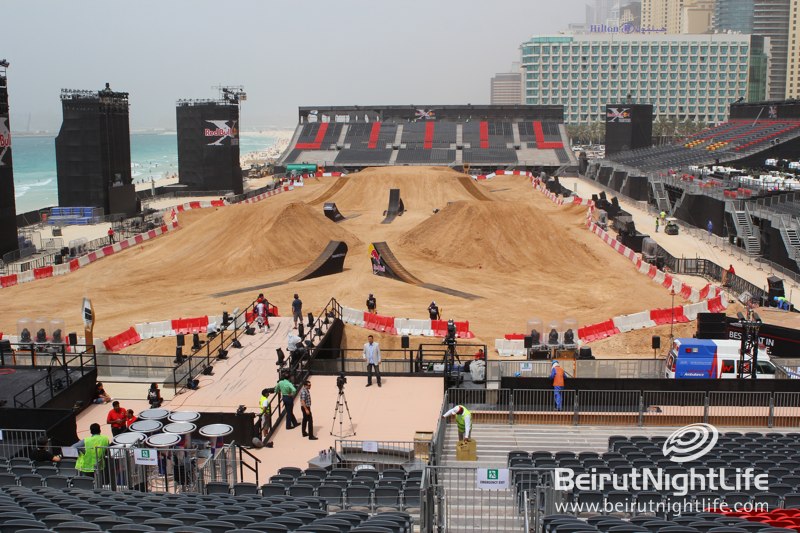 Dubai, UAE: BeirutNightLife, your no.1 website promoting tourism in Lebanon, has landed in Dubai this time to bring you the extended World Tour 2012 kick off in Dubai (UAE) on 13 April, 2012. The First Round of the Redbull X-Fighters 2012 season, which is held under the patronage of H.H Shaikh Hamdan bin Mohammed bin Rashed Al Maktoum, Crown Prince of Dubai and Chairman of Dubai Sports Council, opened with a press attended by the Spanish Champion Dany Toress, Redbull X-Fighters 2011 Dubai Champion, the Australian Josh Sheehan, who spoke about his 23 meter high jump at Burj Khalifa, Tes Sewell, Sporting Director as well as Alberto Shahood, Redbull Area Communications Manager, Middle East & Africa

The much anticipated event was supposed to take place on April 12th with the Qualifying Session being postponed till & April 13th due to the weather. The event will take place on the same day at evening and is expected to attract many motorcycle enthusiasts from the UAE and the region, “The track set for this year has increased 25% to ensure more freestyle motocross riding for our supporters. I can say the design of the venue in Dubai is one of the best I have seen, and we are looking forward for a magnificent event,” said the Spanish Champion.

Created back in 2001, the Red Bull X-Fighters concept has grown to become the biggest and most respected freestyle motocross tour on the planet, featuring the world’s best riders throwing down mad tricks in stunning locations across the globe. The best FMX riders in the world are set to step it up once again and push the sport forward as they visit brand new locations and bring the sport of freestyle motocross to new countries around the globe. The championship takes place in Sydney, Dubai, Istanbul, Munich, Madrid, and Glenhelen.

Stay tuned with BeirutNightLife.com with daily and live updates from the JBR tracks