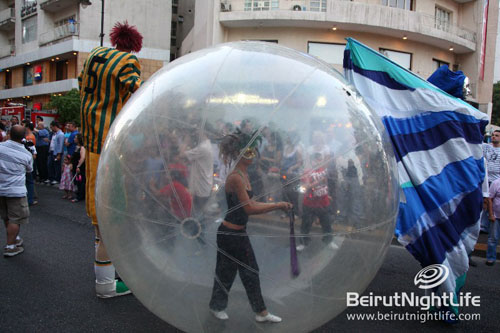 After the national hymn, minister Michel Pharaon welcomed all those who came to the scene for the launching of “Live Achrafieh” festival. “In the name of Achafieh, Rmeil and Saifi MPs and on behalf of the residents of the region, you are welcome to Sassine Square which is ready to host all those who came to attend ‘Live Achrafieh’ festival. Tonight, we will go beyond politics and daily concerns, despite the numerous pending major political issues. We will also let go elections, especially that the democratic cycle is yet complete”, he said, recalling the outcome of the 2009 parliamentary elections and the 2010 municipal elections and the elections of “mukhtars”.

“W are celebrating tonight, altogether, ‘Live Achrafieh’ to secure eternal life for our Capital Beirut, Rmeil, Saifi and for the whole Lebanon. Also, here is a surprise which is a website dedicated to Achrafieh and realized by a large number of committed experts and university studnts who are concerned by the matters of the region. This website is a completion to ‘Adaa’ Forum, accounting for our commitment to the State, to development and to the residents”, Pharaon added. He also thanked all those who contributed to the success of the event, namely the town council and the “mukhtars” and hoped the event to be organized on a yearly basis. On the sidelines of the event, Pharaon ensured that, “Christians will stay in lebanon, especially that it is a holy earth, despite the threats Christians are facing in Orient, due to ongoing wars. As for us, we should overcome these obstacles, mainly the political ones; therefore, we are determined to overcome all these issues to allow the residents of the region and all the Lebanese to share joy, peace and openness”.

To his part, MP Nadim Gemayel stressed, “The importance of this great festival that follows security incidents and confirms our celebration of life. As we previously adopted ‘I Love Life’ slogan, this festival reconfirms our love for life and our will to life in freedom and in dignity. This is an occasion to confirm the right of Achrafieh to life and joy”. He hoped, also, to reorganize the event every year. “Achrafieh is the heart of Beirut, the Lebanese Capital. Once Achrafeh is doing well, the whole Lebanon does well, especially that art and music bring together all the Lebanese”, he went on.

As for the US Ambassador Michele Sisson, she hoped, at the occasion, love, joy and mainly security to prevail on Lebanon. She praised the organization of the open-air “wonderful” event, the exceptional musical program and the presence of people and families in particular. “We are working on establishing peace, stability and security in Lebanon, mainly at the eve of the summer season. I am glad to be here tonight besides the residents and I will stay until the end of the spectacle”, she stated.

In fact, the young girl Mary Vartanian astonished the audience by playing an exceptional violin piece. Then, the spectacle was animated by the comedian Toni Abou Jaoude, ex-Miss Lebanon Clemence Achkar and the journalist Jessica Azar. The Lebanese “Four Knights” band performed tracks inspired by the World Cup, followed by artists Simon Hadchiti, Melissa, Eliane Mahfouz and Rayan who performed popular and patriotic songs. The program also included a multicolor folkloric parade, activities for children and an exhibition at Sassine Square, in addition to fireworks that shone over Beirut. Tight security measures were implemented, during the festival, by the Internal Security Forces and the Lebanese Army, along with Civil Defense and Red Cross units.