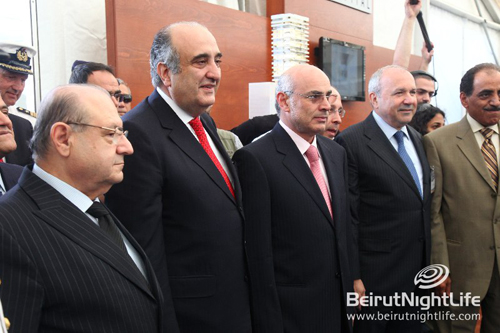 The show is expected to attract a high number of boat buyers and tourists from Lebanon and the region.The show will have the  largest display of yachts, boats and water sports accessories in the Middle East, topped with daily live entertainment.

The inaugural ceremony & official ribbon cutting were carried out by HE Minister of Tourism Fady Abboud representing HE President of the Republic of Lebanon General Michel Sleiman and H.E. Neemtallah Abi Nasr representing the President of the Lebanese parliament H.E. Nabih Berri, in the presence of a long list of Diplomats, Officials, Businessmen, key opinion leaders, local, regional & international VIP’s, representatives of Messe Düsseldorf- Co-organizers of the show- and a remarkable score of journalists.

After the official ribbon cutting, Minister Abboud visited the show aisles gracing stands with meets and greets (on land and docked in water) while inquiring information of the prestigious exhibiting companies and their prominent brands, to the utmost pleasure of boat aficionados.

Talking to the press, Abboud highlighted: “After the great success of the recently held Motor Show which has reiterated Lebanon on the regional exhibition scene, Beirut Boat 2010 comes to reconfirm the country’s Lebanon’s position as a major player in fairs and exhibitions.”

“Marine tourism and private boats have become key components of the Lebanese tourism sector. And with all the touristic Lebanese marinas being packed with private boats, it has become mandatory to develop a new marina with high touristic features to host yachts and boats of all sizes. In fact, boats maintenance and docking in European marinas do not contradict with the existence of a touristic marina in Lebanon integrating state of the art facilities and offering all the necessary maintenance services. As such, our efforts will be focused on establishing several new marinas in Lebanon, the first of which in the port of Jounieh.”

Abboud also underlined the importance of the tourism sector in Lebanon, saying: “the implementation of similar shows and exhibitions is indeed an added value for the tourism sector in Lebanon as the latter is no longer restricted to the summer season; today there are several types of tourism in Lebanon including environmental, heritage related, natural as well as marine tourism in addition to touristic marine exhibitions which promise to be highly appealing for all visitors”.

IFP’ Chairman Albert Aoun- – spoke to the media: “The show that IFP organizes in partnership with Messe Düsseldorf, provides remarkable business opportunities for the boat and water sports industry in the region as we see the momentum move towards an increase in consumer confidence and spending. This year has witnessed a +40% in local sales of yachts in the first 5 months of the year, proving that our economy is resilient and our tourism is flourishing. A remarkable number of VIP’s have already confirmed their attendance promising a buoyant week of business ahead. Great deals are expected for leisure marine companies exhibiting”.

He added: “Beirut Boat is the embodiment of the summer season in Lebanon; visitors will be able to enjoy many captivating features, while viewing some of the most beautiful boats and yachts on display”.

BeirutNightLife.com is also taking part in this event, where you are cordially invited to visit its stand at A18.

BeirutNightLife.com: Beirut the Only way it should be!!