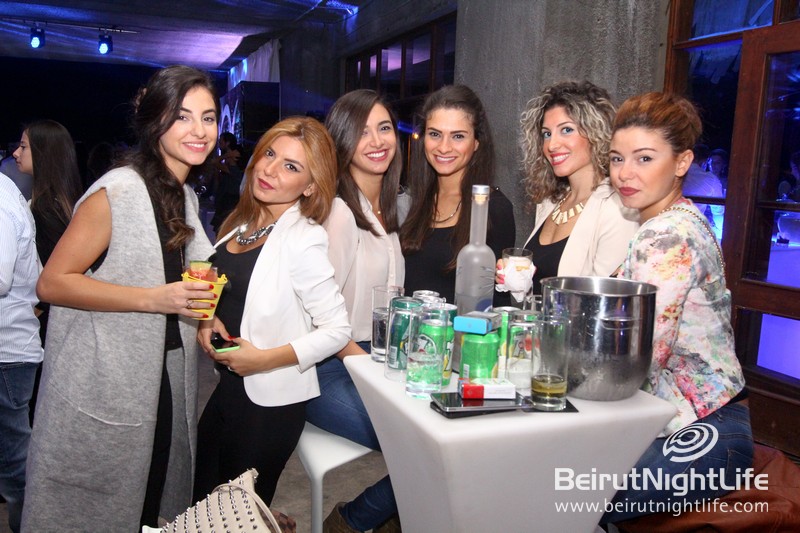 The entire venue was completely transformed into an oasis of glittering glamour, exhilarating entertainment and refined refreshments. The entrance was an alluring curtain of shimmering lights, through which guests entered a tunnel showcasing art-deco scenes from Beirut as well as spray artists working their artistic magic live on canvas. A bar greeted guests before entering the main party, so they could whet their palates with that unmatched J2 taste.

Three food stations lined the stunning outdoor terrace, featuring fresh fruit infused with a J2 kick, an array of international cheeses that paired perfectly with the premium vodka, and satiating crudités. For dessert, a deliciously rich chocolate fountain overflowed with tantalizing sweetness. But, not surprisingly, the star refreshment was J2 Vodka! Specialty drinks were created just for the event, including the signature J2 Martini, J2 Fresh, J2 Breeze Shot and J2 Liquid Rush, each appealing to the varying tastes of premium vodka aficionados.

Overlooking the stunning Mediterranean Sea, reminding everyone in attendance of the crisp, natural Lebanese snowmelt water from which J2 is made, the St. George was swarming with mesmerizing entertainment. On one platform, models were spray painted live by an artist, an acrobatic dance troupe then did amazing feats with various props, and Sherif Moghazy gave an astounding performance on the hang drums. All the while popular DJs – like DJ Danny ‘Dansz’ Samaha, DJ Pablo Abuzeid and DJ Fady Ferraye – spun their musical prowess to the delight of everyone present.

As the night progressed, it was clear that J2 Vodka has the tendency to bring out the best in people, distinctly demonstrated by an amazing impromptu performance by the region’s leading songbirds, Xriss Jor, Ingrid Bawab and LaToya. The three solo artists decided to spontaneously belt out a one-of-a-kind rendition of Lady Marmalade together, surprising the crowd and getting them to jump to their feet and dance.

After a phenomenal night that saw everyone activate their party gene the way that only J2 can, each guest was presented with a valuable gift box. The exclusive giveaways included specialty coasters featuring images of J2 cocktails on one side and how to make them on the other as well as branded J2 shot glasses to enjoy them in, and a card with the all-too- important information on where you can find J2 Vodka!

“This night was a huge success for us all. Like I told my guests, this is a vodka made by the Lebanese for the Lebanese, and our spirit is in each and every bottle,” said R. Adam Aboulhosn, CEO of Middle East Beverage Company, which produces J2 Vodka. “Tonight, we reminded the world that through thick and thin, we will always rise above the ashes to celebrate love, celebrate life, and now, we will also celebrate J2!”

Also commenting on the night’s festivities was one of the country’s most well-known bloggers, Gino Raidy, who summed up the evening perfectly by saying, “Epic, epic party. The crowd was Lebanon’s finest!”

J2 is the first premium vodka to combine the purity of Lebanon’s natural snowmelt spring water with the finest ethanol and distilleries in Poland. Getting its name from the genetic marker that identifies descendants of the ancient Phoenicians, J2 stands apart from the rest of the vodkas on the market because it is more than just a beverage – it embodies a thriving club culture unique to the rest of the world. Simultaneously exceptional in quality, stylishly marketable and culturally relevant, every sip feels like a gratifying celebration.