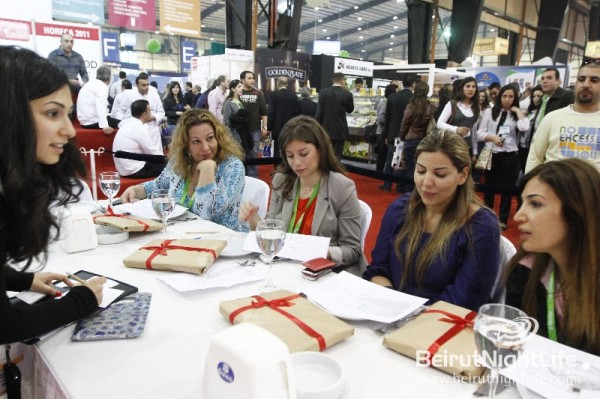 Day 3 of HORECA was absolutely buzzing! With several competitions going on including the bartending competition and the live Lebanese cooking, the atmosphere was as lively and as enthusiastic as it can get. There were thousands of people present in all three sections, eager to taste the food and drink some wine, maybe get a little scoop on what’s new in the market and what’s the next hot trend in the food and hospitality industries. HORECA covered each and every corner of food and beverages – there were hundreds of booths, some with eye-catching displays, and others with attention-grabbing products. People from all over the country flocked to Biel to participate in this year’s trade show; and judging by the traffic outdoors and the bustle indoors, it was safe to conclude that day three at HORECA was a smashing success.

These displays were rated by the jury that constituted of several international guest chefs.

The Lebanese Culinary Heritage held a Mezze workshop, in which the Lebanese cuisine was adapted to international tastes; a special menu of the Lebanese dishes and ingredients was prepared for western tastes.

A very lively bartending competition took place, during which leading Lebanese bartenders prepared and served drinks to a jury made up of members of the press.