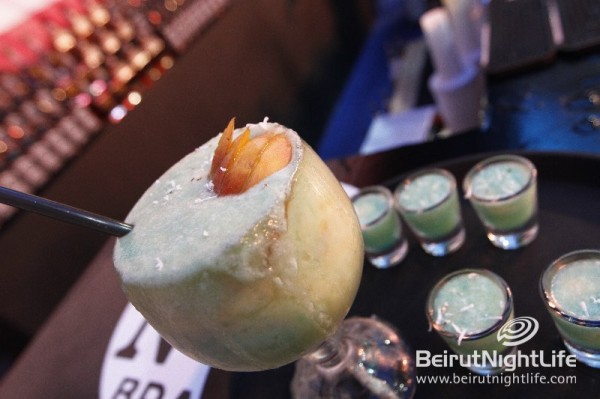 Day 2 at HORECA witnessed the success of a show that was attended by thousands of people from the food and hospitality industries and beyond. The even bigger surprise was that many of the visitors simply came to the show because they heard how fun day 1 was and they wanted to be a part of that excitement. There was booth after booth of mouthwatering food samples followed by a whiff of vintage Lebanese wine in the large tent where hundreds of people were enjoying an early happy hour. The mouthwatering smell of freshly cooked food filled the air as live cooking competitions and demonstrations took place in different sections of HORECA. With international guest chefs and outstanding local talents, HORECA Show 2011 was definitely not an event to be missed!

An award was presented to the best product of the year.

The Atelier Gourmand hosted Chef Tony Moudawar, the executive chef of Moulin d’Or, who demonstrated how to prepare chicken pesto with grilled vegetables and mixed cheese and garlic bread. This was sponsored by Puck.

A national extra virgin olive oil contest took place and the winner was voted by the press.

The Wine Lab hosted a best waiter and wine service competition, and a presentation of wine lists.