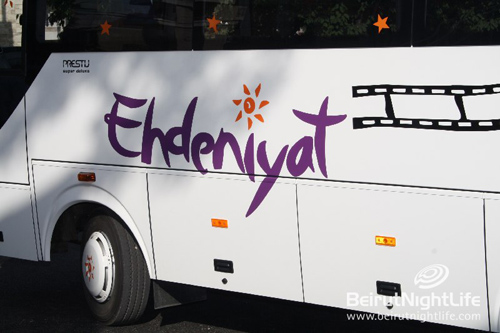 Ehdeniyat started with a fabulous show that took place in Ehden, the bride of north villages.  Ehdeniyat is organized for the fifth consecutive year by Almidan NGO, headed by Mrs. Rima Frangieh.
Ehdeniyat festival was launched by musical and aerobatic performance group gathering more than 70 characters. The show started at the historical building of Alkoubra, passing by the famous place, Almidan square where it was hosted by a big number of people from Ehden and tourists. The performance ended at the entrance of Ehden village.
The festival “Ehdeniyat” was issued from Lebanese environment and from local traditions it respects our aspirations attitudes it was organized to plant the joy in an era of economic social and security stress. Ehdeniyat was an occasion so that the youth could express themselves and show their capacities.
Winter Festival
Ehdeniyat is a yearly festival organized during the winter and during the summer; it was done in two consecutive years in 2004 and 2005 in the region of Zghorta Ehden North Lebanon and was cancelled in 2006 and 2007 due to security reasons. The festival is organized in collaboration with the relevant ministries (Ministry of Education, Ministry of Tourism…) and the relevant associations.
The festival includes various activities such as:
-Environmental activities
-Cinematographic activities
-Handicrafts
-Astrologic activities