What happens if Kristie’s, in collaboration with NRJ, decide to organize a beach party at Edde Sands? Yes, the sexiest night of all summer, with Playboy’s most prolific playmate, Colleen Shanon hitting the decks with Hollywood’s hottest tracks.

Colleen is a gorgeous playmate turned-DJ, but that’s not all. The exuberant DJette was Playboy magazine’s 50th anniversary model, an honor bestowed exclusively onto her. 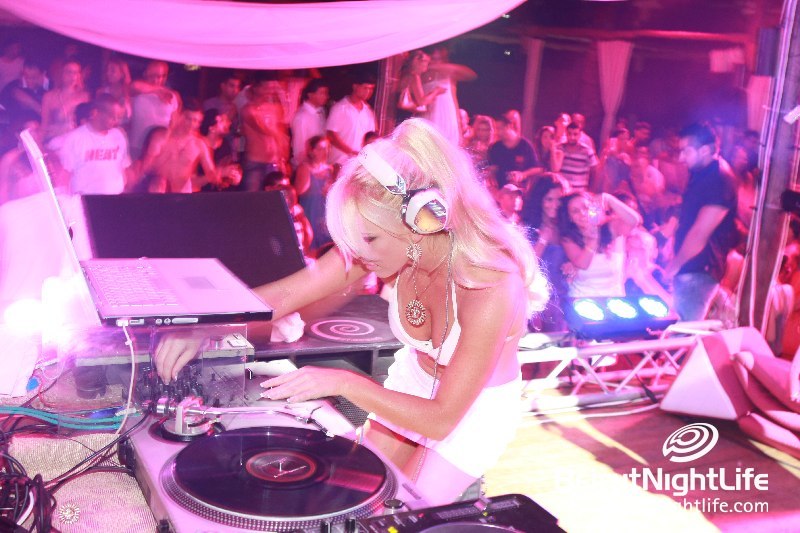 Dimix kicked off the night with his sexy rnb and hip hop getting the already-hyped up crowd into an even sexier mood. The regular section occupied the beachfront, the VIPs the upper decks of the beach bar, and the VVIPs had the prime view of Colleen and access to the Edde Sands jacuzzis. And when it got too hot, the VIPs and VVIPs were showered with cold POMERY champagne as sexy dancers, both male and female, mingled with the crowd.

Dimix’s rnb set was then handed to Colleen, with her pearly-white headphones, whom quickly switched to a wonderful mashup of popular house and rnb hits. Jason De Rulo’s “Watcha Say” was mashed up with Benny Bennassi’s “Satisfaction” as the beachgoers were taken on journey back of good music that stretched way back into the 90s.

The gorgeous playmate mesmerized the crowd, who surrounded the DJ booth and watched in amazement as the sexiness embodied in Colleen herself was turned into sexy sound waves. Reminiscent of the Playboy Mansion, the set was definitely worthy of a Housexy Session!

As the evening of mayhem went on, Colleen threw Playboy bracelets, necklaces and glowsticks to the delighted clubbers, who wore the mementos and waved the glowsticks in the air, adding even more beauty to the already magical surroundings. Then, NRJ Mastermix’s killer lineup, Rudebox and Dio were handed control of the music and as customary of the two they did not fail to please. The mind-blowing set of house, minimal and tech-house was the cherry on top after dimix’s urban music and Colleen’s Housexy set. The 3000+ clubbers last night are a testament to what Kristie’s can provide in terms of breaking the local and regional party norm, by taking glamour, exclusivity and sexiness into a whole new level not seen in Lebanon before!

Let’s hope the masters of beach parties and connoisseurs of sexiness continue to join forces and brighten up Beirut’s Nightlife.