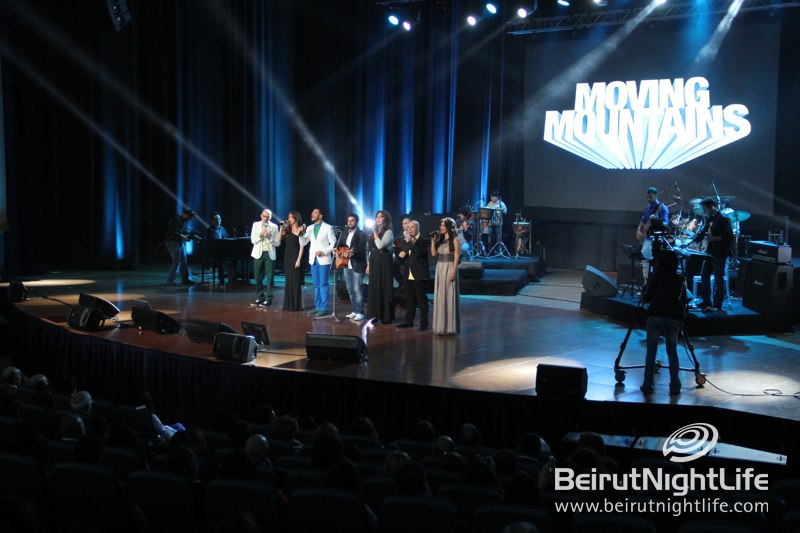 Cénacle de La Lumière held at the Palais des Congrès Dbayeh, a spiritual concert of which the proceeds will  go to support the organization’s mission of raising awareness, and providing rehabilitation to people with drug addiction problems, for the sixth year in a row. “Moving Mountains”, was the name of the 2013 concert, praise for the precious gift of faith, the foundation to a better life.

A large number of shining talents brought uniqueness to the concert on both nights: Corrine Metni, Patricia Bedran Nassar, Sabine Souedi, Edwin Johnny Aouad, Philippe Bachour, and Tony Beylouni, enchanted every member of the audience with inspiration and creativity. Furthermore, the instrumental performance of the musicians Marc Abou Naoum on the piano, Mario Rahi on the violin, Alain Aoun on the electric guitar, Georges Aoun on the bass, Jad Richa on the acoustic guitar, Michel Matar on the drums, and the young Miky Matar on the percussion, spread the joy of life.

During the two evenings, a documentary directed by Mrs. Chantal Haber, filmed by Mr. Samir Seriani, featured the artist Marie-Therese Sader and presented the testimonies of individuals who experienced difficulties and challenges in their lives but were able to overcome them through the power  and grace of faith: drug addiction, blindness, sickens, loss of a child….The documentary was accompanied by a perfect selection of chants and songs based on the theme of the performance and transported the audience on the different stages of change experienced by the testimonials such as “I dreamed a dream”, “Ave Maria”, and other. A journey from a desert filled with pain and despair to a life full of blessings.

Cénacle de La Lumière (CDLL) is a non-profit, nongovernmental organization founded in 2006 with a mission to serve individuals with drug addiction problems and provide support to their families. Through a comprehensive recovery program (bio – psycho – social and spiritual), in a Christian therapeutic community context, they help every person reintegrate in the society as productive, responsible and drug free individuals. They also raise awareness among the youth and the society inspiring them to take right choices and lead lives based on strong values away from drugs.

Newer Post Japanese version of a Falafel: A Life Changing Experience
Older PostWaffles! Waffles! Come Get Your Waffles at L’eau A La Bouche!