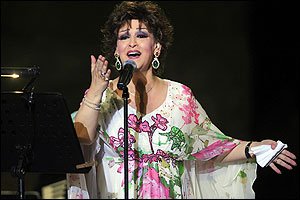 Details: Warda was born in Puteaux, France to a Lebanese Mother. She started singing at the age of eleven in 1951. She quickly became well known for her singing of patriotic Algerian songs. When she married in 1962, however, her husband forbade her to sing. In 1972, Algerian president Houari Boumédienne asked her to sing to commemorate Algeria’s independence, and she performed with an Egyptian orchestra. As a result her marriage broke up, and she dedicated her life to music.