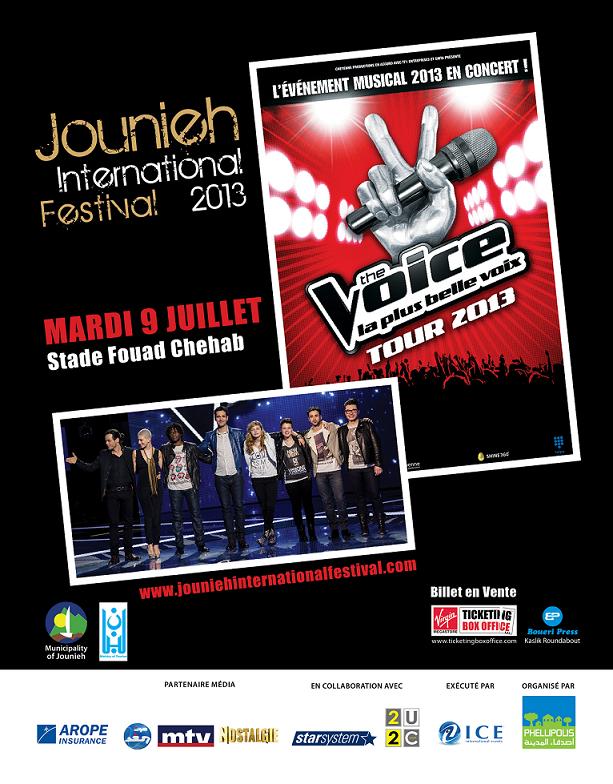 Details: After the unprecedented popularity and groundbreaking success of the French edition of The Voice (La Plus Belle Voix), Jounieh International Festival, organized by the non-profit NGO Phellipolis in collaboration with Star System & 2U2C and executed by ICE, have added Lebanon on the map of the show’s tour. On Tuesday, July 9th 2013, the coastal city of Jounieh will welcome the show’s eight finalists: Yoann Fréget, Emmanuel Djob, Loïs, Louanne, Nuno Resende, Dièse and finally, Olympe and our very own Anthony Touma.

Touma, who garnered 60% of viewers’ votes during his last appearance on the hugely popular show, which transcended borders and had Lebanese viewers transfixed and waiting with baited breath for the result, is a business student at the American University of Beirut. The young singer, born in 1992, wowed the judges during his auditions and moved them regularly with his soulful performances. He and the other finalists will take to the stage in what promises to be an unforgettable concert marked on the show’s tour, following dates in the French cities of Amiens, Toulouse, Marseille and Paris, to name a few. The eight finalists will sing solos, duets and trios of your favorite songs and enchant you with the hits they belted out on the hit show. They will be accompanied by the same musicians who impressed us week after week on TV, the best musicians in France, and will have you dancing and clapping the night away. Purchase your tickets at Virgin Ticketing and Boueri Press, Kaslik.