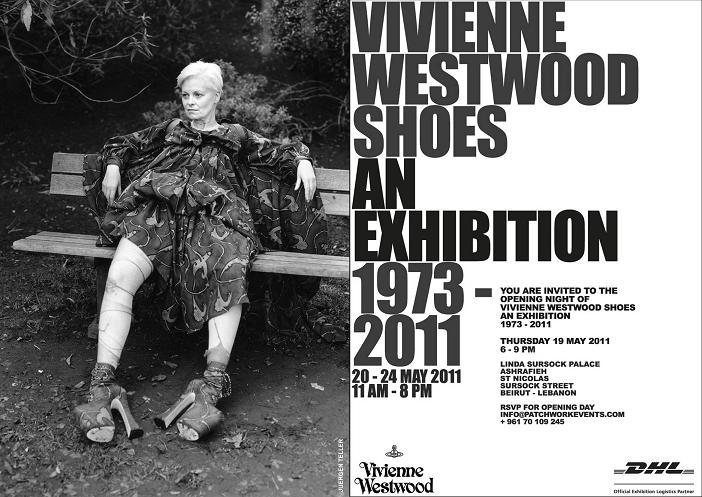 Details: This exhibition celebrates the ingenuity and creativity of British fashion designer Vivienne Westwood, focusing on her designs of the ultimate fetish object: the shoe.

Following the success of the exhibition held in London, Vivienne Westwood wishes to present this unique collection, showcasing over 40 years of design, around the World. The exhibition will travel from its last destination in Moscow, Russia, and continue its international tour to the historical Linda Sursock Palace, Beirut, Lebanon.  From Beirut, the exhibition will travel to Beijing, Shanghai and Tokyo throughout 2011 and New York and Los Angeles at the beginning of 2012.

Built in 1903 by Michel Sursock, the Linda Sursock Palace overlooks the harbor and stands in one of Beirut’s most exclusive areas. This prestigious residence with its original and decadent neo- gothic, Moroccan and Damascus style interiors is the perfect place to house this eclectic exhibition also dedicated to a history of design and style.

The exhibition will showcase around 100 shoe designs and trace the exceptional success of Dame Westwood’s career to date. Illustrating her defiance of the rules of wearability and convention, the exhibition is also evidence of her uncompromising quest for superb craftsmanship and attention to detail.

Supporting Vivienne Westwood’s travelling shoe exhibition, DHL is the official exhibition logistics partner for the duration of the world wide tour. A dedicated team at DHL is working closely with Vivienne Westwood to ensure the safe and timely delivery of all shoes to five global locations.

Westwood’s designs are a result of considered and distinctive influences – 16th Century Dutch Delft pottery as the inspiration for her 1996 Toile Print Boot, British colonialism reflected in the Sahara Plimsoll of 1999, Victorian dandyism influencing the 1996 Trompe l’Oeil Boot and Westwood’s nurse inspired 15.5 centimetre heel Mary Janes of Erotic Zones a salute to S/M and fetishism. Her shoes have also gained a reputation and created memorable fashion moments – the tumbling of Naomi Campbell when wearing the Super Elevated Gillie on the catwalk in 1993, the Rocking Horse which became an instant collectible when it appeared in 1986 and her Pirate Boots, first seen in 1981 but remain popular and in demand to the present day.

Today, Vivienne Westwood’s shoes are celebrated the world over for leading the way in design, creativity and style and have become famous British icons in their own right.