USB Entertainment And B018 Presents Cid Inc at B018 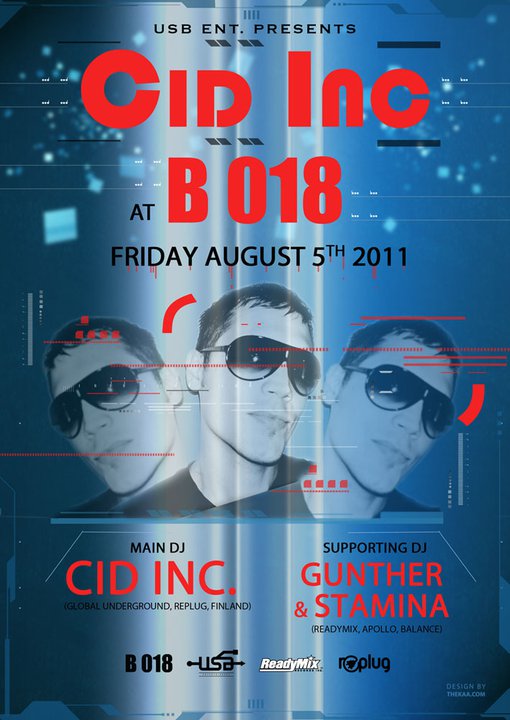 Name: USB Entertainment And B018 Presents Cid Inc at B018

Born in Finland, raised in Sweden and now based back in Oulu in Finland, Henri began making music in the early 90s and soon settled on house as the outlet for his creativity. Now with over a decade of experience behind him as a professional sound engineer, he is well known for his technical ability but that tells only half the story; his musical talent has also flourished with recent productions receiving widespread support from DJs and clubbers alike. Fusing progressive and tech house with elements from other styles, the Cid Inc sound is a thoroughly modern and exciting interpretation of the house blueprint.

Henri first came to prominence when he teamed up with Mathias Bradler to create Mashtronic in 2004 and their productions and hectic DJ schedule soon brought them to a global audience. As well as playing all over Europe and trips to South America, Australia and New Zealand, Mashtronic signed their productions to many of the best labels around including Bedrock and Global Underground. There have been numerous compilation appearances along with a strong remix portfolio; John Digweed, Pole Folder, Mason and D-Nox & Beckers were among those given a reworking in the duo’s forward thinking progressive style. Their own Mashtronic and Restart labels also released an impressive selection of material from artists like Nick Muir and Pole Folder.

With such strong credentials behind him, Henri’s career as a solo artist under the name Cid Inc hit the ground running (the name is a cheeky reference to his early years spent raving to acid house.) Starting with the ‘Sister’ EP on Dyami in 2008, Henri has put together an impressive body of work including releases on Inkfish and Tribal Vision, and remixes for labels like Mango Alley and microCastle. His remix of Facundo Mohrr’s ‘Wooster St’, in particular, came in for much critical acclaim for its marriage of progressive and tech house. The word prolific hardly does it justice with nearly 30 Cid Inc original productions and remixes released in 2009.