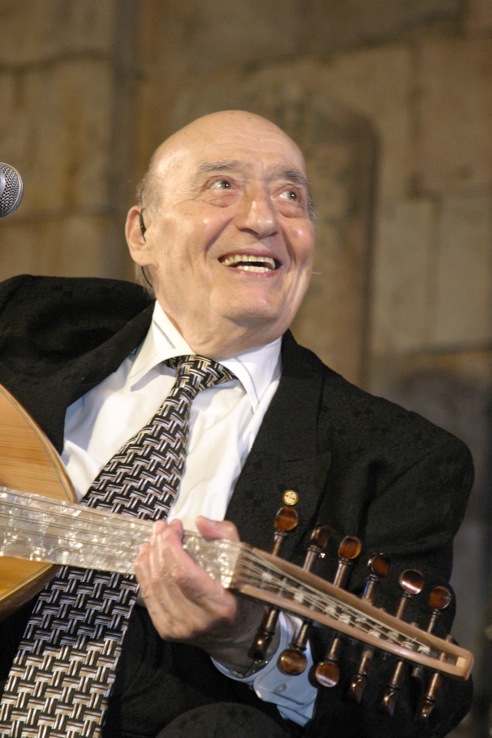 Tribute to Wadih el Safi
Thursday, July 1 – 8:30pm
Byblos Festival’s opening night is a celebration of Lebanon’s greatest living legend Wadih El Safi, revisiting 70 years in music with 2 Lebanese superstars: Najwa Karam and Wael Kfoury.
This once in a lifetime reunion with orchestra, traditional dances and video projections, will be a unique tribute to a unique artist.

SYNOPSIS
Byblos Festival’s opening night is the highly anticipated celebration of Wadih el Safi’s 70 years in music.
“Sawt Lobnan Al Khaled” (The Immortal Lebanese Voice) will be the star of this Lebanese folk night and will be accompanied by 30 musicians and two of Lebanon’s biggest stars: Najwa Karam and Wael Kfoury.

The show, a unique creation for Byblos Festival, will also include traditional dances and the first screening of a short documentary on Wadih el Safi’s life and on the Lebanese folk music he helped create.

Wadih El Safi started his artistic journey at the early age of seventeen when he took part in a singing contest held by the Lebanese Broadcasting Network and was first among fifty other competitors. He was named then the first singer of Lebanon.

He has written over 3000 songs and is well known for his mawawil (an improvised singing style) of ‘ataba, mijana, and Abu el Zuluf. He has performed and recorded with many well-known Lebanese musicians

Najwa Karam and Wael Kfoury are two of the most popular singers in the Arab world but most importantly they were the first amongst the singers of their generation to bring this style of music back to the forefront. And in both their cases, Wadih el Safi’s was the catalyst.

In late 2002, Karam began her collaboration with the Lebanese cultural icon. Wadih el Safi had known her for a while, and had been impressed with her vocal talents. The two of them decided to sing a duet together, depicting the trials of a father-daughter relationship. The ballad, “W Kberna” (We grow old together), was a huge hit in the Arab world.

Wael Kfoury – also a Zahlé native – was born into the Mawwal tradition, which his father taught him from an early age. He has always said that his aim was to blend Wadih el Safi’s tarab with Abdelhalim Hafez’s romanticism. And that’s exactly what he did: not only by covering some of Wadih el Safi’s most famous tunes (“Al-Laylu ya Layla”) but also by keeping this tradition alive and adding new songs to the repertoire.

This will definitely be a night to remember with a younger generation paying tribute to a man and a music that will never grow old.