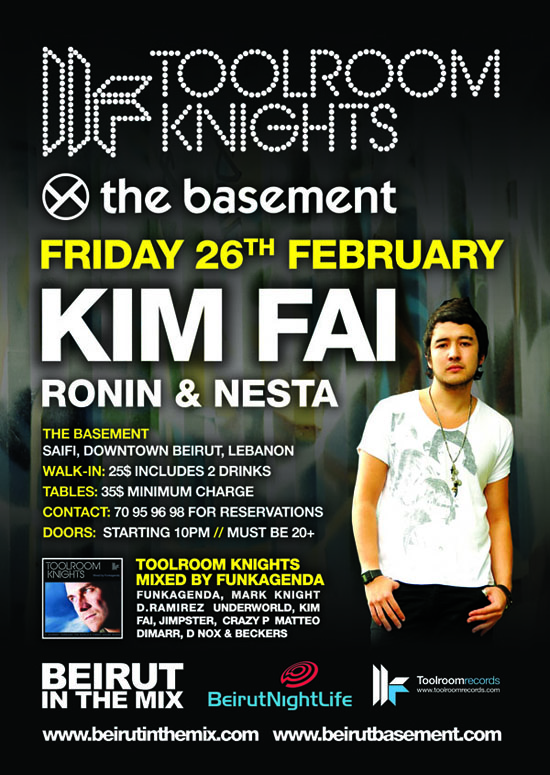 Due to flight cancellations, Kim Fai was unable to travel to Beirut to spin at The Basement last August.. but now he’s back!

Toolroom Records sets the standard as one of the most respected dance labels in the world.

This is a night that will push the musical boundaries, expose leaders of the new school and creating a unique party atmosphere that will bring the underground sound of Toolroom Records to the overground.

The first Edition of the Toolroom Knights in Beirut will feature one of the industry’s rising DJ and producer, Kim Fai, brought to you by Beirut In the Mix and supported by local talents, Ronin & Nesta.

A journey through the worlds finest house music!

<<< ABOUT KIM FAI >>>
Over the last few years music producer Kim Fai has built himself a reputation of delivering solid productions and remixes for undoubtedly some of the world’s hottest dance music label’s. The 24 year old hails from the small town of Tipton in The Black Country, not the first place you would expect to find one of the industry’s rising stars. But Kim’s infusion of Techno & Minimalist House productions have gained support from some of today’s most influential artists including Sander Kleinenberg, Mark Knight, Funkagenda, Dave Spoon, Steve Angello, Dirty South, Umek, Carl Kennedy, Tiger Stripes, Seamus Haji, ATFC, Fergie, Ricky Stone, Exacta, Trophy Twins, Noir and Paul Thomas to name a few.

Kim’s latest installment of material has been given the ultimate seal of approval. What originally started out as a 3 track EP has escalated into a 10 track solo album/EP and was swiftly snapped up by one of the worlds most respected dance music label’s, Toolroom Records. This is something never before done by the ever expanding Maidstone based label, home to some of dance music’s biggest names and who have had countless dancefloor, underground and mainstream hits from some of the biggest and most exciting names in modern day dance.

Over the next few months Kim will be releasing remixes and some very special production collaborations with Funkagenda, Carl Kennedy, Exacta and Paul Thomas in the very near future.