The Goethe – Institut pres. Martin Eyerer (Germany) at The Basement 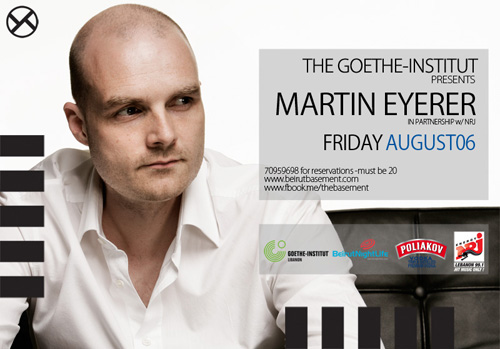 When Martin Eyerer tells a story, everybody listens. Martin reports of his journeys throughout the continents, telling stories of wild escapades in a taxi across the Brazilian jungle through to the impressions of Earth’s capitals and the colorful array of citizens that inhabit them, and obviously of his many Gigs in these foreign lands. Those foreign places quickly become familiar territory when he sets up his digital DJ-system and starts to play that thumping first track because what he plays is groovy Tech House and the sound is a world language of its own that is euphorically absorbed through sweaty pores and pumping glands.

His passion is eminently clear when he starts to talk about his experiences and such is his passion and enthusiasm for the music that one could easily think it was all totally new to him. But it isn’t. Martin Eyerer has been a DJ for 20 years – and just as many years a producer, label owner, radio show producer. Throw in his two young children and it seems that the energy never leaves his side.

Martin Eyerer is not a laptop artist, but a true musician. His high-end studio meets the highest requirements and has become an interdisciplinary interface for mastering (whether it is Hip Hop, Pop or Electronic) and he is also co-producing several mainstream acts (Eyerer e.g.became a gold record in UK). On top of all this, the Tech-House Posse around him like Gui Boratto,Oliver Koletzki, Toni Rios, Stephan Hinz, Namito, Chopstick, Oliver Klein or Robert Babicz come to ‘his house’ to jam. It is a small circle of friends who share the same musical interest and who put 200% in to every release they do.

Whether collaborations, solo Works, Remixes or Compilations, all his works appear almost monthly on dance-floor dominating labels, like Kling KLong,Systematic,Idiomatically,
Great Stuff, Kickboxer and on English big names like Renaissance or i/o records. The most unbelievable aspect of this is the variety of styles Martin stands for. There is no segment from Deep house to minimal Techno that Eyerer is not in control of, always keeping his focus on the dance-floor. This consistently high-quality of output results in rocking world-wide floor-fillers, spun by the most well-known DJs. Beyond that, hits like Make My Day (Haunting) by Eyerer and Chopstick feat. Zdar/Cassius made their way into the A-rotation of English music television.

As an important platform for his music Martin Eyerer has founded his own labels – Kling Klong and Session Deluxe. Due to the conscientious release policy (releasing artists like Koletzki, Namito, Oliver Klein, Babicz and Eyerer himself the Label boss was able to establish an independent sound between electro, minimal and tech-house on Kling Klong and more tooly, housy and underground on Session Deluxe. Releases of both Labels always enter the top 20 of all sales and download charts for electronic music.

Peak time is the best time in a DJ-set, but in Martin Eyerers opinion, you have to work for it as a DJ – there is no way to force it. With that philosophy he builds up his sets, using the newest material and unfolds an oppressive, sizable Groove. Martin Eyerer does not try to get through the night with the current hits. Instead, he travels his very own sound-spectrum in one intuitively construed DJ-set. These legendary sets make their way around the globe resulting in Martin playing regularly in all parts of the world.

But Martin wants to reach more people than only those who frequent nightclubs. That’s why he regularly works on mix compilations, e.g. his own series on Session Deluxe. He has also set up same called Session De Luxe – a national weekly radio-show that goes out live every Sunday evening on Sunshine live – Germany’s biggest station for dance music, and it’s on this platform that Eyerer presents all the latest releases for his hungry following to devour as they polish of their weekend’s activities on sofas, in bedrooms or in the car on their way home after visiting their parents for Sunday lunch in the country. By himself or with guests like e.g. Bodzin, Anthony Rother, Chardronnet, Huntemann, Gregor Tresher, Abe Duque, Thomas Schumacher, John Selway or Shlomi Aber, Session de Luxe never disappoints. But not only are the monologues important – Martin also involves the listeners, giving everyone the chance to ask questions about anything concerning dance music.

In 2008 he released his debut Album on Kling Klong named Word Of Mouth.
It was the next step in establishing him as an international player. The album was released in 12 countries and exported to all the world. Feedback from the media was overwhelming. This and the fact that Martin was supported with plays and respect by most of the international dj league lead to a more than expected number of sales.
All in all Word Of Mouth was a big success. Martins first single out of the album “furthermore” came along with mixes by Marc Romboy and Oliver Klein. The next follow up will be cave canem incl mixes by Gui Boratto, Robert babicz and Someone Else.
For 2009 already dj gigs and tours are booked for Brasil,Argentina,Chile, Mexico,China,Japan,India and Australia. Also scheduled studio-dates with a few other famous artists and finally martin will start working on his second long player in Autumn.